A nationwide survey of nearly 500 directors highlighted that daily risk oversight continues to be one of the central challenges facing boards, as well as an increased focus on shareholder engagement and board composition. 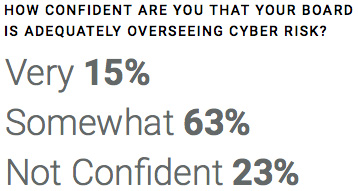 Communicating with shareholders occupies more of the board’s time today, spurred by increased disclosure, majority voting in director elections, and say on pay, among others. Nearly 90% of directors surveyed by NYSE Governance Services rated their board’s understanding of its investor base as excellent or good, but respondents indicated the need for coaching, as well as the desire to bring on directors who have experience with shareholder activism.

Almost two-thirds of the respondents noted that their board has clear protocols designed to outline how to engage with investors, but most respondents indicated that they haven’t been trained in this area.

Respondents recognized that shareholders desire more transparency into board composition and to keep pace with the changing corporate landscape, and boards acknowledged the need to have directors with varying skill sets. Respondents ranked industry expertise as the most important attribute of a potential director followed by financial expertise, IT/cyber experience, gender diversity, and CEO experience. Other attributes rising on the list compared to previous surveys include legal/regulatory experience and racial diversity.

“The expectations placed on boards in terms of what they are asked to oversee is much greater today due to many factors, including an increasingly dynamic global economy, political uncertainty, disruption caused by new technologies, and an active M&A environment,” says Kevin M. Connelly, CEO, Spencer Stuart. “As a result, directors find themselves needing to be knowledgeable in areas they may or may not have had much past exposure to or experience in, such as cybersecurity.”

“We are observing that shareholders desire more transparency into board composition — specifically who is in the boardroom and do they have the skills and perspective to bring independent oversight in making smart, strategic decisions for the company in critical areas including CEO succession, risk oversight and corporate strategy,” says Julie Hembrock Daum, Spencer Stuart North American Board Practice Leader. “Investors are also starting to become more vocal on director tenure when independence may become blurred based on the length of time a director has been on a board.”

Risk oversight has historically been noted as a challenge facing the boardroom and this year’s survey found that 55% of directors do not believe a public company board can ever fully anticipate the different aspects of risk in the current corporate environment, particularly emerging risks like cybersecurity and social media. Among the findings, the majority (80%) of boards noted that cyber risks were on the agenda in the past year. And social media risk continues to be a lower priority, with only 35% of respondents confirming that their board had discussed social media risk as an agenda item in the past year.