Nearly 80 percent of all businesses fail their interim PCI compliance assessment, leaving them vulnerable to cyberattacks, according to Verizon’s 2015 PCI Compliance Report. With more than two-thirds of all purchases made with payment cards and $20 trillion in credit card transactions expected for 2015, security has become a top priority for organizations that accept credit cards. 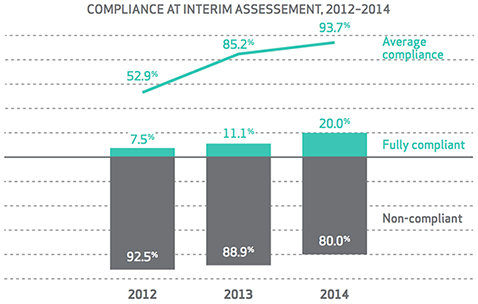 Verizon’s research has consistently found that since 2009 organizations suffering a data breach showed lower than normal compliance with a number of PCI DSS controls.

By reducing the likelihood of being breached, companies can better manage their brand, ensure consumer trust and potentially avoid hefty fees. In fact, 69 percent of all consumers are less inclined to do business with a breached organization.

This year’s findings indicate that only 29 percent of companies are still fully PCI DSS-compliant less than a year after being validated. While annual compliance and ongoing control standard maintenance remains low, there is a bright spot in the 2015 report.

Almost twice as many companies were validated as compliant during their interim compliance review in 2014 as compared with 2013.

Another troubling trend is that data security is still inadequate. The volume and scale of data breaches in the past 12 months is proof that current security techniques are not stopping attackers — in many cases they aren’t even slowing them down.

PCI DSS compliance must be viewed as part of a comprehensive information security and risk-management strategy. A PCI DSS assessment can uncover important security gaps that should be fixed, but it is not a guarantee that the data is safe from a cyberattack.

Naveen Sharma, Marketing Manager at Lepide, commented: “Compliance is key to business success and consumer trust. Without formal IT change management controls in place, data security of customers and business is a daunting task, especially with the ever evolving security threats in the Payment Card Industry. By incorporating means to ensure PCI DSS in online services and rigid audit control, things can be kept under control.”