The average packet volume for DDoS attacks increased 340 percent to 4.36 million packets per second (Mpps), and the average bit volume swelled 245 percent to 12.1 Gbps in the final quarter of 2014, according to Black Lotus. 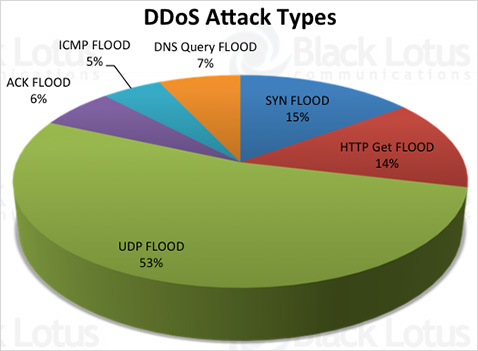 The largest bit volume DDoS attack observed during the report period was 41.1 Gbps on Oct. 1, a swell in volume since the beginning of 2014, due to attackers’ usage of blended, complex attacks to achieve outages. Organizations should take care to scrutinize other parts of their systems to guard against credential leaks or other data breaches, as cyberattackers will often use DDoS as a distraction for other nefarious activity.

Forty-nine percent of the 143,410 attacks observed during Q4 2014 were regarded as severe, and more than half of all attacks mitigated resulted from UDP flood attacks, which cause poor host performance or extreme network congestion via producing high amounts of packets and IP spoofing.

The average attack during the period reported was 12.1 Gbps, a jump in bit volume, and 4.36 Mpps, tripling average packet volume since last quarter. This indicated a continued reliance on leveraging multi-vector attacks, signaling the need for security practitioners to tap intelligent DDoS mitigation rather than padding networks with extra bandwidth.

“We found DDoS attacks continued trending down in frequency quarter over quarter, but, on average, attack volumes multiplied,” said Shawn Marck, CSO of Black Lotus. “With networks and IT teams becoming defter at spotting and stopping volumetric attacks, cybercriminals are turning to blended approaches to confuse organizations, often using DDoS attacks as smokescreens for other underhanded activity.”