In 2014, 15,435 vulnerabilities were discovered according to data from Secunia Research. The vulnerabilities are spread across 3,870 applications published by 500 different vendors, and these numbers alone demonstrate the challenge faced by IT teams trying to protect their environment against security breaches. 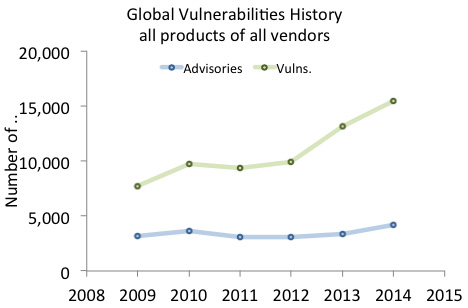 Obtaining full visibility to ascertain risk is not simple. In addition to known vulnerabilities in known products in the infrastructure, users have to deal with the opaque area that is bundling: vendors bundle their products with, for example, open source applications and libraries, complicating the customers’ chance of knowing which products are in fact present on their systems.

“In fact, when we look at the number of days lapsed between the times when OpenSSL vulnerabilities were disclosed, until third-party vendors informed of their product being vulnerable, we find that there is no general pattern to response times. Consequently, organizations can not presume to be able to predict which vendors are dependable and quick to react, when vulnerabilities are discovered in products bundled with open source libraries,” says Kasper Lindgaard, Director of Research and Security at Secunia. 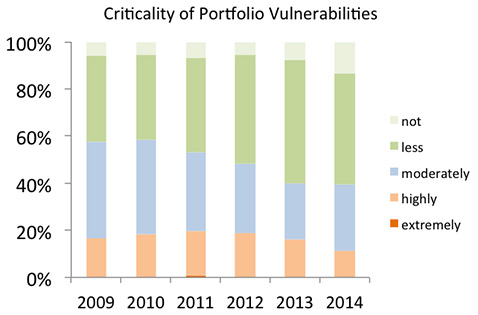 For those applications that are known to the security teams, the data for 2014 shows an encouraging trend: Of all the 15,435 vulnerabilities, a full 83% had a security patch available on the day the vulnerability was disclosed to the public. This number represents a continued improvement in time-to-patch, particularly when taking a retrospective view of the last six years and the low of 49.9% recorded in 2009 in all products.

Total numbers across all applications

The 50 most popular applications on private PCs