85 percent of enterprise network teams today are now involved with security investigations, indicating a major shift in the role of those teams within enterprises, according to Network Instruments. 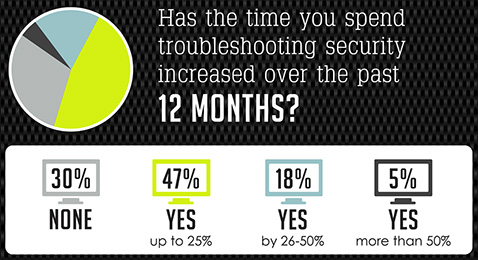 Large-scale and high-profile security breaches have become more common as company data establishes itself as a valuable commodity on the black market. As such, enterprises are now dedicating more IT resources than ever before to protect data integrity. Growing security threats affect enterprises’ internal resources – and what activities could fall through the cracks thanks to the renewed focus on security measures.

As threats continue to escalate, one quarter of network operations professionals now spend more than 10 hours per week on security issues and are becoming increasingly accountable for securing data. This reflects an average uptick of 25 percent since last year. Additionally, according to the findings, network teams’ security activities are diversifying. Teams now engage increasingly in implementing preventative measures (65 percent), investigating attacks (58 percent) and validating security tool configurations (50 percent). In dealing with threats, half of respondents indicated that correlating security issues with network performance is their top challenge.

The full results of the survey also show that emerging network technologies have gained greater adoption over the past year. Highlights include:

40, 100 Gigabit Ethernet and SDN approaching mainstream: Year-over-year implementation rates for 40 Gb, 100 Gb and SDN in the enterprise have nearly doubled, according to the report. This growth rate is projected to continue over the next two years as these technologies approach more than 50 percent adoption. Conversely, survey respondents were less interested in 25 Gb technology, with over 62 percent indicating no plans to invest in equipment using the newer Ethernet specification.

Enterprise Unified Communications remains strong but lacks performance-visibility features: The survey shows that Voice-over-IP, videoconferencing and instant messaging technologies, which enable deeper collaboration and rich multimedia experiences, continue making strides in the enterprise, with over 50 percent penetration. Additionally, as more applications are virtualized and migrated to the cloud, this introduces new visibility challenges
and sources that can impact performance and delay. To that end, respondents actually noted a lack of visibility into the end-user experience as a chief challenge. Without visibility into what’s causing issues, tech teams can’t ensure uptime and return-on-investment.

Bandwidth use to grow 51 percent by 2016: Projected bandwidth growth is a clear factor driving the rollout of larger network pipes. This year’s study found the majority of network teams are predicting a much larger surge in bandwidth growth than last year, when bandwidth was only expected to grow by 37 percent. Key drivers for future bandwidth growth are being fueled by multiple devices accessing network resources and larger and more complex data such as 4K video. Real-time unified communications applications are also expected to put more strain on networks, while unified computing, private cloud and virtualization initiatives have the potential to create application overload on the backend.

Key takeaways: what can network teams do?

Results were compiled from the insights of 322 respondents, including network engineers, IT directors, and CIOs from around the world.