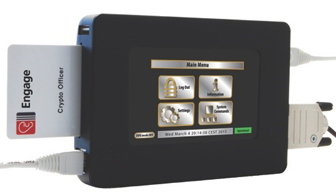 The appliance is configurable in one of two signing modes: software code or digital documents. As a code-signing appliance, it enables publishers concerned with the potential introduction of spyware, malware, etc. during code distribution to incorporate HSM protection into their code-signing process without the complexity of installing and operating general purpose Operating Systems and HSMs.

For code-signing applications, the BlackVault CYNR is a “plug-n-playâ€ appliance that allows software developers to easily digitally sign and timestamp their software.

All cryptographic material and signatures are stored within the BlackVault CYNR’s highly secure HSM that includes:

For document-signing, BlackVault CNYR provides an intuitive client interface making it easy to select the document to sign, create the public / private key pair (or select a previously existing key), and with a single click finish the signing process.