TechValidate conducted a survey to determine how organizations are implementing NAC policies and security solutions to address today’s environments, given the proliferation of cybercrime and growing concerns over insider threats. 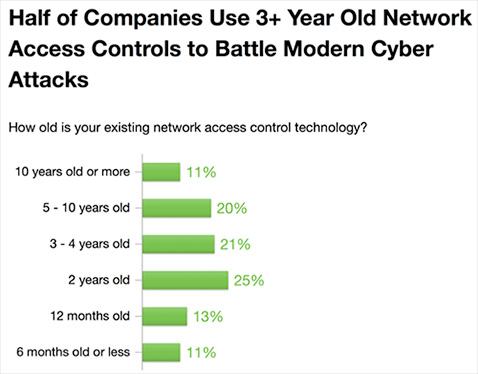 The key findings, revealed at RSA Conference 2015, point to outdated approaches to security and a lack of advanced solutions to limit the carte blanche access granted to employees and third parties under older network security models. The survey also indicates that insider threats caused the most actual harm or damage to information security (61%), not outside threats.

“It’s remarkable that many organizations are still utilizing network security technologies developed in the nineties â€“ a time when the Internet was still in its infancy” said Kurt Mueffelmann, president and CEO for Cryptzone.

“The cyber attacks we have seen over the last few years, have demonstrated that it’s far too easy for hackers to steal user credentials, and then use those credentials to traverse the enterprise network in search of the most valuable data. Organizations need to accept that outdated access control technologies are not working against today’s sophisticated adversaries. The default position should be to make your infrastructure invisible, and then grant access on a case by case basis, only after user identity, posture and context have been validated. Organizations must stop giving out the keys to the kingdom when it comes to privileged user, third party and employee access” Mueffelmann added.