High workplace stress levels for IT professionals are dramatically impacting both employees and employers. These impacts are illustrated by increases in those staff looking to find another job, and in those working increasing amounts of unpaid overtime to cope with workloads. A growing number of IT staff are also experiencing substantial disruption to their personal lives as a result of work demands. 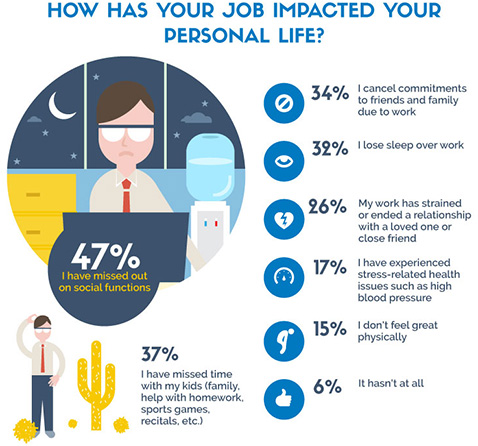 A new GFI Software study found that 88% of those surveyed are experiencing workplace stress, while almost 90% of respondents are actively considering leaving their current IT job due to workplace stress and dissatisfaction with working conditions, up from 68% in 2014.

Pressure and unreasonable demands from management clearly emerged as the biggest contributing factor to workplace stress, but was down considerably from last year. In 2015, one third (33%) of those surveyed singled out management as their biggest point of stress, down from over 50% last year.

Up considerably on last year was stress caused by the users that IT staff look after, jumping from 11% to 21%. In fact this year’s study saw rises across all sources of stress, resulting in a more distributed set of responses. One consistent response over the last four years: lack of staff, remaining constant with around 10% of respondents citing this as their primary cause of stress.

There’s been a disappointing rise in the number of respondents reporting that a relationship or friendship had failed or been severely damaged due to work commitments intruding on personal life. Over 26% experienced this in the last year, up from 16.5% last year and a new high in the four years of the survey. 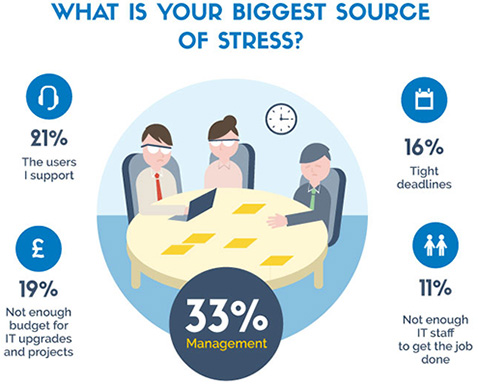 Along with the rise in stress and worker unhappiness, this year’s survey revealed a jump in the amount of unpaid overtime required by IT staff to meet deadlines and manage deployments. 40% of those surveyed work up to five unpaid hours of overtime a week, with a mean average of 7.3 hours a week of unpaid overtime worked – the highest in four years. The 48-hour maximum working week set down in the EU Working Time Directive is therefore often exceeded by a large number of those surveyed.

This year’s figures are in contrast to the US, where the same survey revealed slightly lower levels of stress, with 78% of those surveyed stating they are stressed at work – broadly in line with the previous year. The number of people looking to change jobs is also lower than the UK, at 81% – but higher than the previous year in the US, when an already high 78% of those surveyed were actively looking for a new job.

The independent blind study was conducted by Opinion Matters among 205 UK IT administrators in companies of 10 or more people. The survey gauged respondents’ stress levels at work and revealed their opinions on their main stressors, as well as how their stress level compares to that of friends and family and how it affects their personal and professional lives.
More about
Share this