The majority of IT security professionals don’t have full visibility into where all their organization’s sensitive data resides, according to Perspecsys. 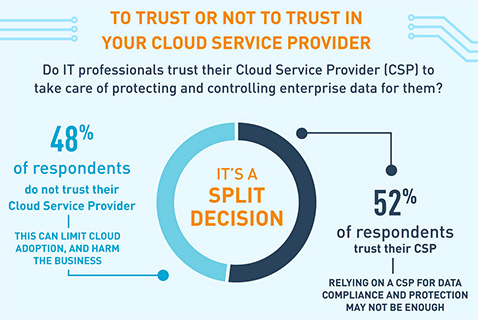 Challenges with tracking where sensitive and regulated data is flowing, and the inability to control that flow in outsourced environments such as SaaS cloud applications, where it can move freely between data centers and cloud provider’s partner’s systems, is a key challenge for enterprises in regulated sectors.

More than 125 attendees at RSA Conference 2015 took the survey, which was conducted via in-person interviews by Perspecsys. The results interestingly reveal a split decision when it comes to trust in Cloud Service Providers (CSPs): 52 percent of respondents say they trust their CSP to take care of protecting and controlling their enterprise data and the other half (48 percent) do not.

IDC forecasts that public IT cloud services will account for more than half of global software, server, and storage spending growth by 2018. The Perspecsys survey findings align with this projection, with 67 percent of respondents preferring to store the majority of enterprise data in the cloud – that is – if data privacy and compliance regulations could be addressed. Interestingly, the current perception remains that private cloud is more secure than its public cloud cousins. For example: