Phone fraud continues to threaten enterprises across industries and borders, with the leading financial institutions’ call centers exposed to more than $9 million to potential fraud each year. 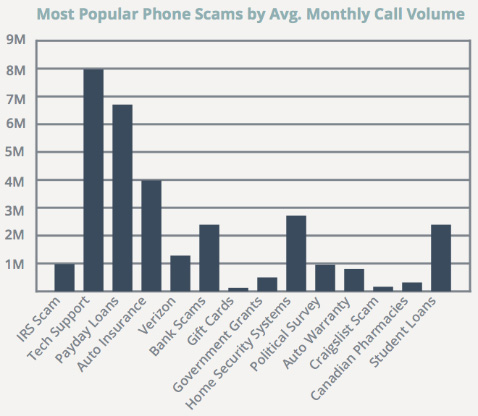 Pindrop analyzed several million calls for threats. They found a 30 percent rise in enterprise attacks and more than 86.2 million attacks per month on U.S. consumers.

Financial and retail institutions have seen an increase in phone fraud of more than 30 percent since 2013, with one in every 2,200 calls being fraudulent. This rate increases for retailers that sell popular, expensive products with a high resell rate; one major retailer saw phone fraud rates for Apple product orders as high as one in every 300 calls.

Credit card issuers receive the highest rate of fraud attempts, with one in every 900 calls being fraudulent.

“These attackers are sophisticated, using a variety of tactics, including automation, working in criminal rings and using both the phone and cyber channel to make tracking their actions more difficult,” said Matt Garland, vice president of research and head of Pindrop Labs. “As major data breaches such as Anthem and Target have occurred, attackers have found the phone channel to be the vulnerable underbelly for corporations and consumers, allowing them to monetize the breaches through social engineering and account takeovers.”

As part of its ongoing monitoring of phone threats, Pindrop Labs tracks common scams targeting consumers, such as the IRS or Technical Support scams. These attacks have successfully defrauded millions, particularly consumers in vulnerable populations such as the elderly, immigrants and young college students.

Robocalling services, which provide a cheap method to make thousands of calls per day, have increased in frequency to one in every six phone numbers calling the average consumer, with 2.5 percent of U.S. phones (8.1 million in total) receiving at least one robocall per week.