Energy security professionals are extremely confident in their ability to detect a cyberattack on critical systems, with 86 percent stating they could detect a breach in less than one week. 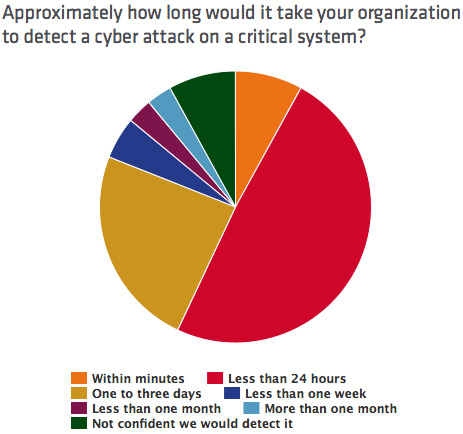 A survey conducted by Dimensional Research found that 49 percent of all respondents believe their organization could detect a cyberattack on a critical system within 24 hours. Energy executives were found to have the highest levels of confidence, with 61 percent claiming their organization could detect a critical system breach in less than 24 hours.

However, according to Mandiant’s M-Trends 2015 report, the average time required to detect an advanced persistent threat on a corporate network is 205 days, and in the 2015 Data Breach Investigations Report, Verizon reported that 66 percent of cyberattacks took months to detect.

“Cybersecurity within energy companies is stronger than it has ever been, yet growing bodies of evidence indicate that it’s still far too easy to compromise the energy infrastructure,” said Mark Weatherford, principal at The Chertoff Group.

“Confidence at the executive level is certainly critical and necessary for success, but over-confidence can lead to a potentially dangerous false sense of security. Interestingly, a survey conducted last year by the Ponemon Institute found that 31 percent of 160,000-plus IT security professionals in 15 countries never speak with senior company executives, which might explain why Tripwire’s survey found that energy executives have such a high level of confidence in their organization’s ability to detect a critical systems breach. Therefore, it’s a legitimate question to ask if executive confidence is misplaced,” Weatherford added.