Ipswitch polled 313 IT professionals in United States with 59 percent noting that they were not fully prepared to undergo an audit. Additionally, 75 percent of respondents lacked confidence that colleagues authorized to work with sensitive information are adequately protecting it.

When asked what they would be willing to do instead of a compliance audit, nearly half of all respondents (46 percent) would either undergo a root canal procedure, work over the holidays, live without electricity for a week or eat a live jellyfish. 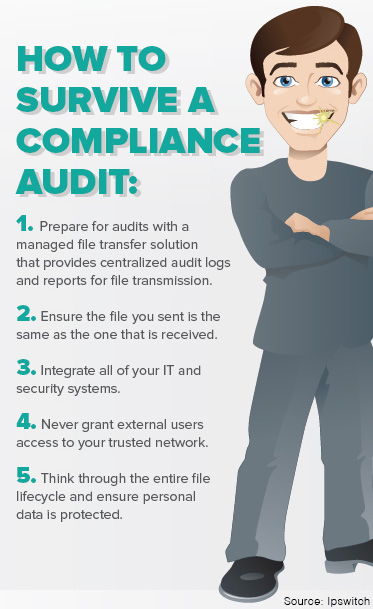 As challenging and costly as audits can be, in particular when it comes to allocation of resources as the respondents reported, David Canellos, CEO of Perspecsys, believes it is important that companies are able to show an auditor early in the process that data has been encrypted or tokenized across the vast majority of systems – within an enterprise as well as their cloud apps.

“IT pros face a two-part challenge. They have to get a handle on classifying and ensuring that all users know what data the enterprise deems to be sensitive and then they need to provide tools, whether the data is on-premise or in the cloud, to ensure it can be encrypted without causing business operation hiccups. If the security approaches create operational issues for end-users of data they will do their best to figure out a way around them. Techniques such as on-the-fly tokenizing or encrypting data that policies identify as sensitive can help make the use of cloud applications much more manageable,” Canellos added.

IT professionals are unprepared for audits and lack confidence in user security:

Compliance audits are disruptive and consume significant IT resources:

IT professionals would rather undergo a root canal procedure than endure a compliance audit: