Today at Black Hat USA 2015, Akana released the findings of a survey of over 250 security practitioners, including CSOs, CISOs, and security architects. 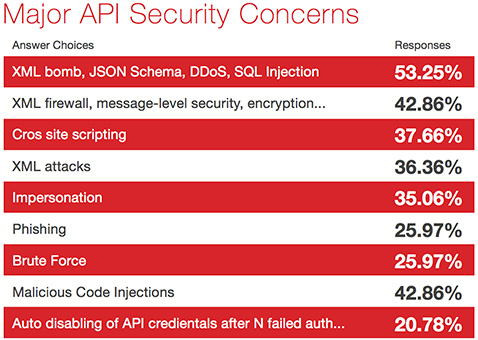 Aimed at quantifying the maturity of API security practices amongst the leading digital enterprises, the survey results reveal that while the majority of respondents are taking steps to secure API access, only few had taken steps to ensure that sensitive data was being securely handled in the apps that access the APIs.

Just as the emergence of Web brought web-based threats and resulting countermeasures to the forefront, the survey indicated universal recognition from security practitioners of increasing threats and vulnerabilities that are unique to the API channel.

The survey suggests an emerging digital divide as high-performing companies embrace core digital capabilities and APIs to move ahead. As API’s are gaining adoption, enterprises needs to recognize and take steps to mitigate the additional threat vectors that they might be exposing their data and organization to.

“APIs are new enough in the enterprise that people want the latest on how industry peers are dealing with security threats,” said Roberto Medrano, EVP at Akana. “We felt there was an opportunity to ask others to share their insights and worries. The survey report should be a helpful starting point for determining best practices in API security going forward.”