In the wake of the Ashley Madison hack and consequent data leaks, blackmailers and scammers are doing their best to extract as much money and information as it’s possible from the panicking users of the popular cheating site.

Trend Micro researchers have spotted several variants of ransom-demanding emails impersonating either Ashley Madison, Impact Team (the hackers), Team GrayFlay (as far as we known, a non existing entity) or no one in particular – all requesting specific amounts of money in bitcoins to be paid in order for their family and friends not to be informed of the matter, or for their information not to be released in a “final leak” (click on the screenshot to enlarge it): 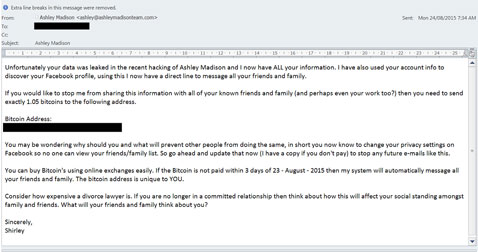 “Some variants are trying to ‘raise money’ by pretending to be lawyers preparing a class-action lawsuit against the company, and asking would-be ‘victims’ for money,” the researchers noted.

But this particular approach could be less effective than expected, as apparently there are no plaintiffs eager to attach their name to a lawsuit.

What else can Ashley Madison users expect?

For one, phishing emails leveraging the leaked data in order to make the target divulge additional sensitive information that could lead to identity theft.

Secondly, emails from scammy companies and individuals that claim that they could delete the victim’s data from the Internet for a fee.

Imagine you’re a spouse receiving an email claiming that your partner has used the site. Opening a malicious link or attachment without thinking about it twice seems more than likely in such a stressful situation.