86% of IT decision makers say their companies already deploy containers, or they plan to do so within a year, according to Twistlock. Of these, 35% said containers are already broadly deployed across their networks.

91% of respondents said they are concerned about container security, and half are “very” or “extremely” concerned. Of those who do not use containers in their data center, 81% said the addition of in-container security would prompt them to adopt a container strategy. The survey, conducted in August, netted 272 responses from across North America.

Containers, such as those by Docker and CoreOS, are a method of deploying applications faster and more cost-effectively than traditional means. Container technologies have become a phenomenon of late, with Docker rising rapidly in popularity and market share.

The survey found that Docker is the predominant source for container images – more than 98% of those who are using containers said they use Docker hub or Docker Trusted Registry as image source. 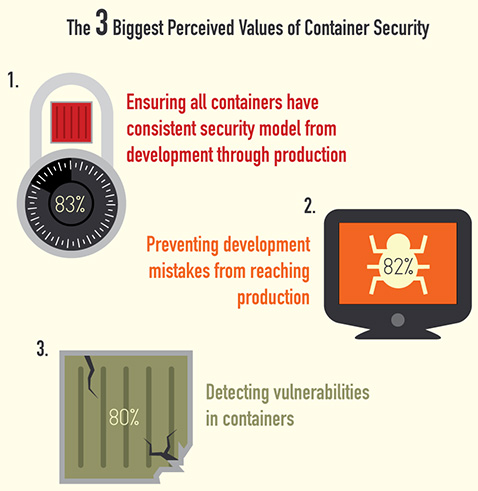 The three container security features that respondents said they would most-benefit from are:

“This survey shows what Twistlock has known all along—that even though containers are accessible and easy to deploy, many companies do not have a good grasp of how to manage container security. This remains a major adoption hurdle that is keeping data centers from migrating to containers completely” said Ben Bernstein, CEO of Twistlock.