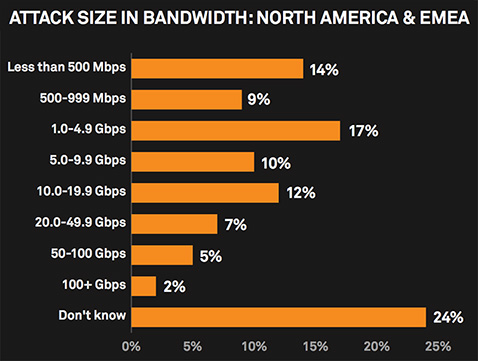 Seven key findings from the research include:

1. 1 in 10 companies surveyed risked an average of $1 million or more if website was down for one hour during peak revenue period.

2. It’s not if, not when, but how frequently: 50 percent of companies suffered a DDoS attack and 8 in 10 of those struck were targeted more than once.

4. When caught by surprise, brands lose credibility: more than 1/3 of organizations hit learned of the attack from customers, partners, or other 3rd-parties. In EMEA, of those who learned via 3rd-party, 79 percent experienced some form of associated theft

5. “Slow and steady” have lasting repercussions: rather than trying to overwhelm networks, attackers often use a “slow and low” strategy, deploying smaller attacks to disrupt and distract, install malware, steal data or funds, and tarnish the brand.

7. Companies realize the threat is valid: 54 percent of companies are investing more in DDoS protection as compared to a year ago.

Mark Tonnesen, CIO and CSO for Neustar, elaborates on this shifting trend of smaller attacks as a cloak for data-mining malware.

“If the attacker’s goal isn’t to cause an outage but to disrupt, he doesn’t need to craft an attack of extra-large proportions. A SYN Flood attack is a good example. The attacker sends enough SYN requests to a company’s system to consume server resources and stall legitimate traffic. It’s a kind of ‘low and slow’ DDoS attack—steady and problematic, though not tsunami-like,” Mark Tonnesen, CIO and CSO for Neustar explains.

“In launching such an attack, the attacker accomplishes several things: he disrupts operations, distracts the website and security teams, and makes sure the target network is still operational—that is to say, accessible. Now the attacker can go in and plant malware or a virus, setting the stage for data theft, siphoning funds, or whatever else,” added Tonnesen. 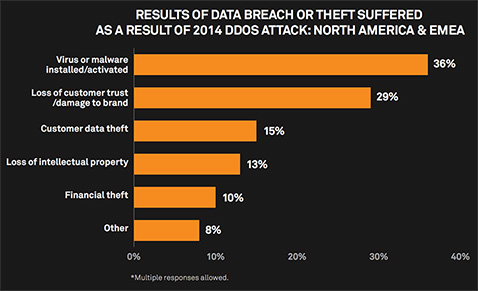 Attack methodology has evolved from singular incidents to repeated attack patterns with the majority causing a persistent threat to profitability and brand reputation. Attackers with malicious intent no longer need to be an expert to execute these destructive attacks; DDoS tools allowing anyone to take down online services are inexpensive and readily available.

In the wake of online attacks, organizations must consider the continuous risk to digital reputation – 33 percent of those surveyed discovered attacks from a third party, including customers and partners. Proactive protection is essential; statistics show once an organization is attacked the chances of experiencing a breach are more than 70 percent.

“Think about it: why saturate the pipes so that you can’t access the network? Doing the reverse lets attackers harass a target and set the stage for exfiltration. In this sense, a so-called smaller attack can be more dangerous than a huge one that knocks you offline but may not result in a data breach,” Tonnesen added.
More about
Share this