A new Ponemon Institute survey includes insight from 692 IT and IT security professionals from both global businesses and government agencies, who answered more than three-dozen questions around threat intelligence sharing. The majority of organizations where those employees work have more than 1,000 employees. 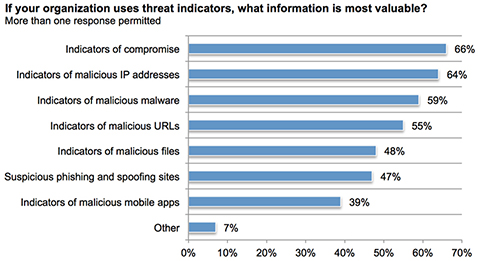 When asked, “Did your company have a material security breach in the past 24 months,” 47 percent of those surveyed said yes. Survey participants also asserted that threat intelligence information that has been analyzed and refined so that it is useful in hindering cyberthreats could have prevented those cyberattacks.

Specifically, 65 percent said that they believed threat intelligence could have prevented or minimized the consequences of a cyberattack they had suffered in the last 24 months. When asked the same question in the 2014 survey, 61 percent said yes.

“It is becoming more and more apparent that raw threat data is not effective. Just like the bad guys share ways to carry out their attacks, organizations must also share actionable and timely ways to stop threats,” said Larry Ponemon, Chairman and Founder of the Ponemon Institute. “It is also clear that it is impossible for one organization to harvest that threat intelligence on their own as evidenced by the fact that 83 percent of people we surveyed exchange threat intelligence.”

Other key findings in the survey include: