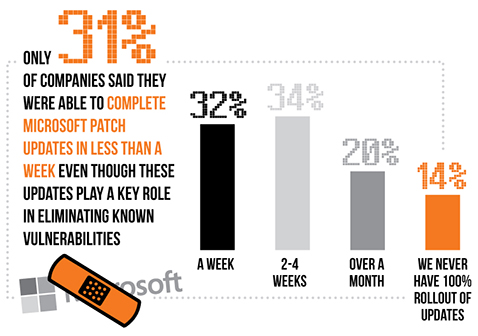 Fewer companies today (32%) said they have advanced endpoint security protections in place, which is down from 39% last year, even though an increasing number of respondents (73% this year vs 58% last year) consider endpoints to be “most vulnerable” to a cyber-attack.

Although more respondents recognize that endpoints are vulnerable to a cyber-attack, fewer companies today said they have endpoint protection in place compared with last year. In addition, 67% of respondents said the number of endpoints is rising, down from 76% last year.

The survey found that 82% of IT professionals are either ‘highly’ or ‘moderately’ concerned about a potential security breach in the next year but only 31% say they are ‘well prepared’ for a cyber-attack. 73% of respondents consider endpoints, such as desktops, laptops and mobile devices, to be the “most vulnerable” part of the network. In spite of significant concern of a potential data breach and the value of endpoint security, most companies have inadequate defenses in place.

Case in point, only 31% of companies said they were able to complete Microsoft patch updates in less than a week even though these updates play key role eliminating known vulnerabilities. Moreover, 40% said it took up to a month (compared to 34% last year), 13% said it look over a month (compared with 19% last year), and 16% “never” achieved full rollout of updates, up slightly from 14% last year). In spite of these endpoint security challenges, only 25% have a dedicated endpoint security budget, down from 30% last year.

These findings indicate little change from last year, implying there is stronger reason to believe that the hackers would have susceptible environments with which to breach. Security awareness may be up, but actions are unchanged.

Approximately half of respondents continue to agree that there is a bigger need for SIEM and/or advanced threat detection and correlation systems to have deeper endpoint analytics. The respondents categorized it as ‘very important’ as endpoints are a common attack point and monitoring these points of entry are vital to identifying an attack and taking steps toward remediation.

A majority of VP and C-Level IT leaders surveyed indicated a heightened fear of a security breach in the coming year and acknowledged a rapidly shifting security landscape, which now includes endpoint security.