On Friday, the 13th of November, a slew of coordinated attacks executed by ISIS terrorists in Paris has resulted in the death of over 120 people in cafes, restaurants, a concert venue, and in the vicinity of the Stade de France stadium. 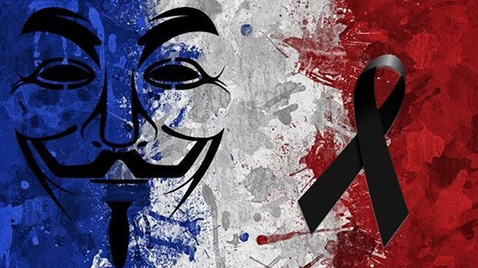 On Saturday, the hacktivist collective Anonymous has announced the start of OpParis, an operation that plans to disrupt the terrorists’ online presence by bringing down recruiting sites and Twitter accounts, and also to uncover the identities of ISIS attackers, supporters and recruiters around the world.

The collective called on all those who want to join the operation to report any ISIS material to the official #OpParis Twitter account.

According to the same account, more than 5500 Twitter accounts associated with the terrorists have already been taken over by Anonymous. Some of them have also been leaked online.

NewsBTC reports that a group of ethical hackers that goes by the name Ghost Security Group have been searching for Bitcoin addresses used by ISIS to gather and transfer funds for their operations, and found several. They have also identified several Bitcoin funding websites used by ISIS on the darkweb, and shut them down.

According to one of them, they “are currently in the process of collecting valuable evidence for United States government officials.”

Some Anonymous members have been actively tracking down and exposing alleged ISIS recruiters.

In the meantime, there have been reports that the individuals who executed the Paris attacks on Friday may have used Sony’s popular PlayStation 4 gaming consoles to keep in contact and plan the coordinated operation.

“While it remains unclear whether the Paris ISIS terrorists employed PS4 to communicate, there are a few options, from sending messages through the PlayStation Network (PSN) online gaming service and voice-chatting to even communicating through a specific game,” Forbes contributor Paul Tassi noted.

“With PlayStation 4, it seems likely that simple voice communication could have worked just fine,” he added. “The point is that terrorists could simply be in a PSN party together and chatting away mostly free from the fear that anyone is listening because of the difficulty and infrequency of governments eavesdropping on those forms of communication.”

This is not the first time that Anonymous is targeting ISIS members. After the massacred at Charlie Hebdo in January this year, they started #OpISIS, and managed to shut down tens of thousands Twitter account belonging to ISIS members and supporters.
More about
Share this