In order to find the riskiest industries in the cloud, CloudLock analyzed 10 million users, 1 billion files, and over 91,000 applications, focusing on and breaking down risk in the Retail, Manufacturing, Healthcare, Financial Services, K-12, Higher Education, Government, and Technology industries. 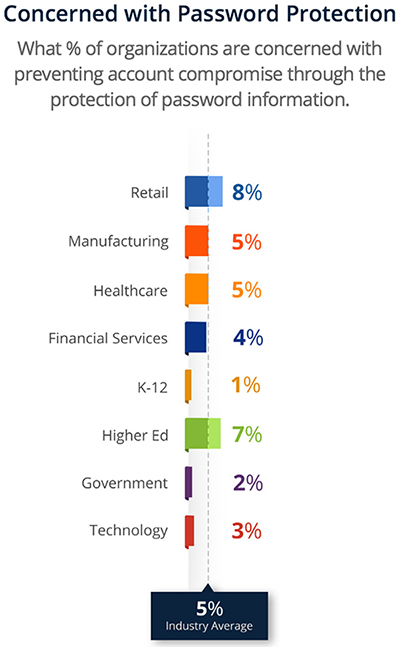 In the Technology industry, adoption of cloud technologies, as well as security awareness, is notably higher than that of other industries, with 83 percent of technology firms deeming excessive sharing a top cyber security concern.

Every organization shares five primary cloud cybersecurity concerns, regardless of what industry it is in: account compromise, Cloud Malware, Excessive Data Exposure, Over-exposed PII and PCI data, and collaboration. On average, only 5 percent of organizations take active steps towards protecting credentials, which include attempts to identify instances of exposed credentials in public cloud environments.

Surprisingly, the Manufacturing industry showed, on average, the least concern for ensuring access permissions are granted appropriately for PII such as users’ Social Security Numbers, IDs, dates of birth, etc., (27 percent) and PCI (39 percent). Only 10 percent of Technology firms are focused on protecting PII, but 41 percent are concerned with PCI. Higher Ed is the most concerned with protecting PII (77 percent) and PCI (61 percent), with the huge database of student records, as well as credit card and banking information tied to large spending areas such as tuition, administrative and research funds.

A whopping 99 percent of files in the Financial Services industry that are exposed to the general public, meaning they are accessible to anyone with a link, or searchable via search engines, can be attributed to exposure by only one percent of its users. This is followed by Higher Ed (84 percent), Government (80 percent), K-12 (78 percent), Manufacturing (77 percent) and Retail (76 percent). The Technology industry had the least concentrated exposure of risk, with only 68 percent of files that are exposed publicly are by that of the top one percent of users. 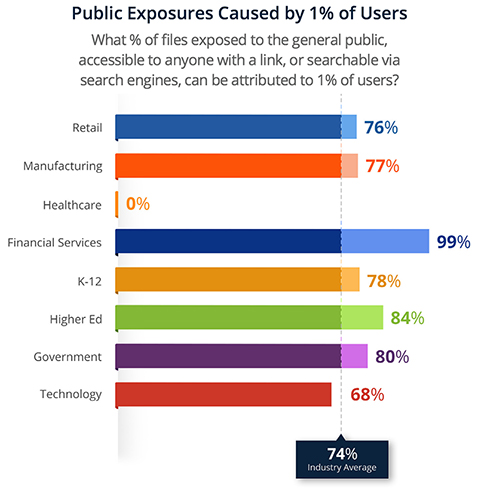