The teenage administrator of the Darkness.su XMPP service has been arrested last Monday by the French police, in connection to the wave of false bomb threats that were made against several French schools on January 26 and February 1, 2016, and later against educational institutions around the world.

The prosecutor wanted the 18-years-old Vincent L. to be indicted for conspiracy in the aforementioned events, but the high schooler has ultimately been indicted on only one count: refusal to provide the authorities with his computer encryption keys. 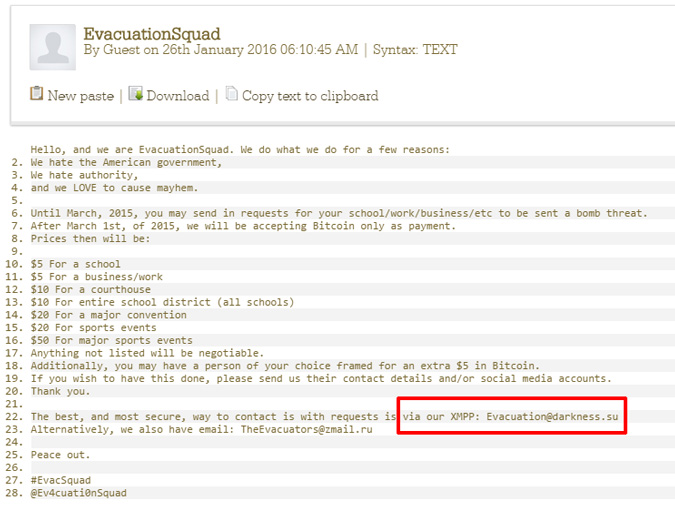 Darkness.su, when used by users who hide their IP address with the help of TOR or a VPN / proxy service, is considered to be completely anonymous. No IP addresses or communications are logged, and anyone can register an account without providing any personal information.

The youngster is not thought to be the author of the false bomb threats, but the ones who are – a group calling themselves Evacuation Squad – have possibly used his XMPP service to “phone” them in (the threats were made in the form of pre-recorded phone calls).

What they group definitely used the service for was to create an email account that has been tied to a Twitter account through which they took responsibility for the bomb alerts.

As reported by Numerama (in French), the country’s penal code mandates a sentence of up 3 years in prison and a 45,000 euros fine for anyone who is able to provide decryption keys for services that have been used to commit (or facilitate to commit) a crime but refuses to do so when asked by the judicial authorities.

That maximum sentence can be increased to 5 years in prison if that refusal results in the inability of the authorities to prevent further crimes or minimize their effect, which may be the case here if the Evacuation Squad still uses the service.

Still, that’s not what the youngster stands accused of. He has been temporarily released from custody, and is still unclear what the consequences of his refusal to hand over his computer keys to the authorities might be.