While data breaches make great headlines, what is often missing from those reports are the details on how the attackers got into the organization in the first place. Mobile devices can be a critical part of any cyber attack.

Based on a study of 588 IT and security leaders at Global 2,000 companies, a new report by the Ponemon Institute and Lookout examines the risk introduced by employees accessing increasing amounts of corporate data via their mobile devices and assigns a cost to a mobile-related breach.

The report found that for an enterprise, the economic risk of mobile data breaches, including direct operational costs, as well as potential maximum loss from non-compliance and reputational damage, could be as high as $26.4 million.

It also found that a mobile data breach is more common than many may think. 67 percent of organizations report having had a data breach as a result of employees using their mobile devices to access the company’s sensitive and confidential information.

With an average of 3 percent of employees’ mobile devices infected with malware at any point in time, that’s more than 1,700 mobile devices, in a typical organization, connecting to an enterprise network everyday.

Underestimating the impact of a mobile data breach

Another key issue revealed in this report is IT and security leaders’ gross underestimation of just how mobile their employees have become. Take customer records, one of the most at-risk types of data: on average, IT believes that 19 percent of employees can access customer records via mobile while 43 percent of employees say they have access to that data. With mobile data breaches happening in the majority of enterprises today, this visibility gap introduces unacceptable risk. 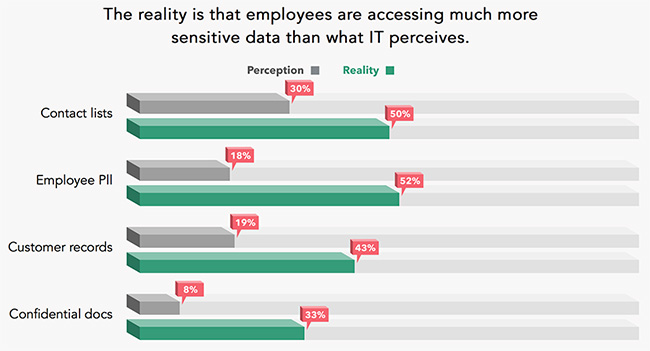