A third of all employees believe they own – or share ownership of – the corporate data they work on, with half thinking they can take the data with them when they leave, according to Veriato. 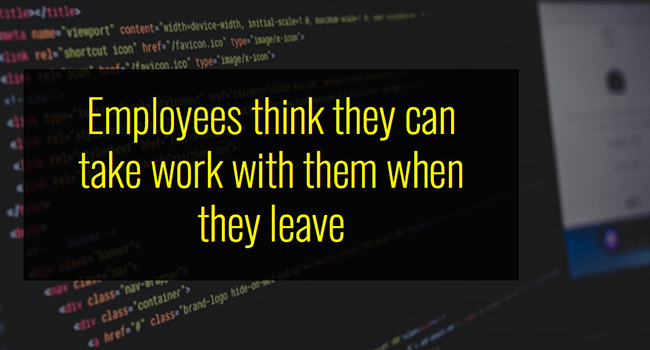 These findings likely result from a massive disconnect, or lack of education, on who owns the data or any consequences for taking it—with nearly 60 percent of the 400 random employees surveyed saying they have never signed a confidentiality agreement or they never even knew one existed.

About 13 percent of respondents said it was acceptable to take login credentials with them, while others said it was suitable to take work product (47 percent), customer data (7 percent), marketing and sales lists (6 percent each respectively) and financial data (5 percent).

“Companies need to do a better job educating their employees about what they can and cannot share or even use themselves when they move to another organization,” said Mike Tierney, COO of Veriato. “The potential damage from even one employee taking confidential and proprietary customer data, software code or log-in credentials with them to a new job, especially with a competitor, is astronomical. Informing employees about who owns the data and how it can be used can eliminate much of that risk.”

The findings were not all negative, however. Of respondents, 95 percent would turn down an offer of money from a competitor for confidential data. In addition, only 5 percent of respondents acknowledged taking corporate data with them for financial or personal gain. Of those, 55 percent began to consider taking the data with them when they considered leaving or heard rumors of layoffs and 55 percent have used or continue to use the data in subsequent jobs. Another 7 percent have been offered money in exchange for confidential information—18 percent of those offers being $5,000 or more.

In addition to companies needing to ensure their employees sign confidentiality agreements or non-competes, monitoring and analyzing employee behavior can be a significant deterrent to any insider threat.

According to the survey, 92 percent of employees would not take corporate data if they knew their activity was being monitored, with 79 percent believing their company has the right to monitor their activity.

“Knowing what is going on within your perimeter is critical to keeping your valuable data out of the hands of competitors,” Tierney added. “But equally important is communicating with your employees to ensure they know what belongs to them and what consequences can result if they even think about taking it with them when they leave.”