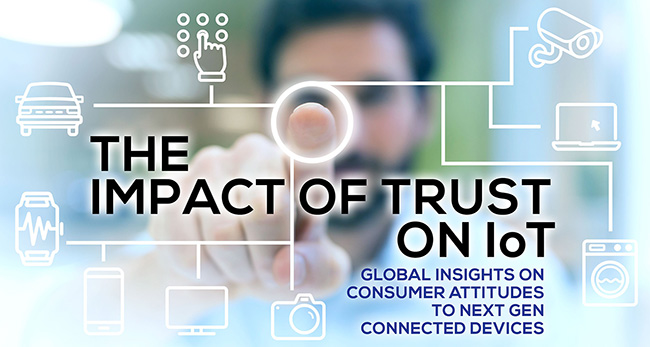 Globally 60% are worried about the Internet of Things, and especially so in growth markets such as Brazil, India and South Africa (66%), although in the UK it appears to be less of an issue (50%).

Trust-related issues privacy (62%) and security (54%) were the number one concern, named twice as often as real-world concerns such as physical safety (27%) or not being able to fix the technology if it breaks down (24%).

A quarter (24%) of respondents consider health-related information as the most sensitive data when it comes to connected devices, and this is especially the case in China (44%). By contrast, in more mature markets such as USA and Germany, there is heightened sensitivity around location data (52% and 50% respectively, as compared to a global average of 43%).

Connected world: Rise of the machines?

Rather dramatically, 1 in 5 consumers (21%) even worry that IoT would result in machines taking over the Earth.

“Whilst this survey shows that consumers are excited about a future connected world, it also clearly identifies the need for the industry to consider how such technology and services are rolled out when it comes to building a trusted relationship with consumers,” said Rimma Perelmuter, CEO of MEF.

“The business opportunities surrounding IoT are clear, but only if industry heeds the lessons of the broader mobile ecosystem when it comes to the paramount importance of building consumer trust at the outset. Our 2016 Global Consumer Trust Report demonstrated the demand for transparency in mobile apps and services with 64% saying it’s important to be told when an app is collecting and sharing personal information. This new report reaffirms the need for all stakeholders in the ecosystem to take action now to secure a viable future for such technologies.”