Worldwide IT spending is forecast to total $3.49 trillion in 2016, a decline of 0.5 percent over 2015 spending of $3.5 trillion, according to Gartner. This is down from last quarter’s forecast of 0.5 percent growth. The change in the forecast is mainly due to currency fluctuations.

“There is an undercurrent of economic uncertainty that is driving organizations to tighten their belts, and IT spending is one of the casualties,” said John-David Lovelock, research vice president at Gartner. “Concurrently, the need to invest in IT to support digital business is more urgent than ever. Business leaders know that they need to become digital businesses or face irrelevance in a digital world. To make that happen, leaders are engaging in tough cost optimization efforts in some areas to fund digital business in others.”

“As an example, the savings from legacy system optimization and enhancements are being redirected to fund digital initiatives. It’s about doing more with the same funds,” said Mr. Lovelock. “Typically, less than 10 percent of organizations are in cost optimization or cost cutting mode. However, the need to spend on digital business initiatives in a time when revenue growth does not support runaway IT budgets is forcing more organizations to optimize as a first step. Business processes, as well as IT, are undergoing optimization — digital business requires both. However, many CIOs are reluctant to raise this possibility, given the cultural and political barriers to optimizing business costs.”

The most evident results of these optimization efforts are in the switches in spending between assets and services. “Most traditional IT now has a ‘digital service twin’ — license software has cloud software, servers have Infrastructure as a Service, and cellular voice has VoLTE,” Mr. Lovelock said. “Things that once had to be purchased as an asset can now be delivered as a service. Most digital service twin offerings change the spending pattern from a large upfront payment to a smaller reoccurring monthly amount. This means that the same level of activity has a very different annual spend.” 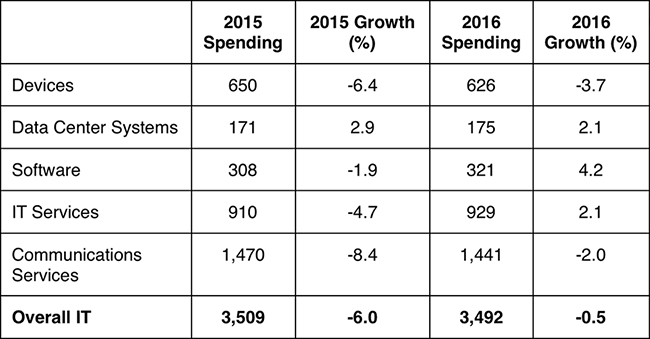 The Gartner Worldwide IT Spending Forecast is the leading indicator of major technology trends across the hardware, software, IT services and telecom markets. For more than a decade, global IT and business executives have been using these highly anticipated quarterly reports to recognize market opportunities and challenges, and base their critical business decisions on proven methodologies rather than guesswork.

The device market (PCs, ultramobiles, mobile phones, tablets and printers) is forecast to decline 3.7 percent in 2016. The smartphone market is approaching global saturation, slowing growth. The PC and ultramobile markets are expected to decline. The underlying reasons are a combination of factors and are geography-specific, and the worsening economic conditions in many countries only serve to amplify the impact of these factors.

Data center systems’ spending is projected to reach $175 billion in 2016, a 2.1 percent increase from 2015. This top-level relative stability masks some changes within the segments; enterprise network equipment had a stronger-than-anticipated 2015 as a result of network upgrades, and this is expected to carry on into 2016. The external-controller-based storage segment continues to suffer from ongoing challenges. In the server segment, demand from hyperscale buyers is expected to reduce in 2016, particularly in regions that are suffering from economic challenges, such as Eurasia. The mainframe refresh, which benefited the market in 2015, is expected to abate in 2016, also inhibiting the overall growth figures.

Global enterprise software spending is on pace to total $321 billion, a 4.2 percent increase from 2015. The operating system forecast has been downgraded, reflecting Gartner’s expectation for further delays in the adoption of Windows 10 and Windows Server 2016. However, it is the key emerging markets, particularly Latin America, which face escalating political and economic challenges that are responsible for the slow growth. Organizations in those regions must balance cost cutting with growth opportunities during times of economic concern.

Spending in the IT services market is expected to return to growth in 2016, totaling $929 billion, up 2.1 percent from 2015. A stronger outlook for Japan and India is nearly balanced by a weaker outlook in Brazil, China and South Korea, based on challenging economic and political conditions in Brazil; and government actions and weakening economic conditions in China and South Korea.

Telecom service spending is projected to decline 2.0 percent in 2016, with spending reaching $1.4 trillion. Continuing economic downturns in major markets such as Russia and Brazil are dampening spending in both fixed and mobile voice, and a slight slowdown in China’s growth is affecting consumer confidence and eroding spend in fixed voice services. In enterprise services, conditions in these same three major markets are leading to consolidation among businesses (reducing connections and spend), however, mobile data spending is a bright spot with accelerating growth driven by improved pricing on bandwidth, mobile app and 4G/LTE network availability.