The Dutch police has announced on Tuesday that they have pulled a system of encrypted communications used by Dutch and possible foreign criminals off the air, and that they have arrested a 36-year-old man from Nijmegen on suspicion of money laundering.

After much speculation, the name of the company that created the system and offered it as a service has been confirmed as Ennetcom. If you visit the company’s website, the following announcement is shown: 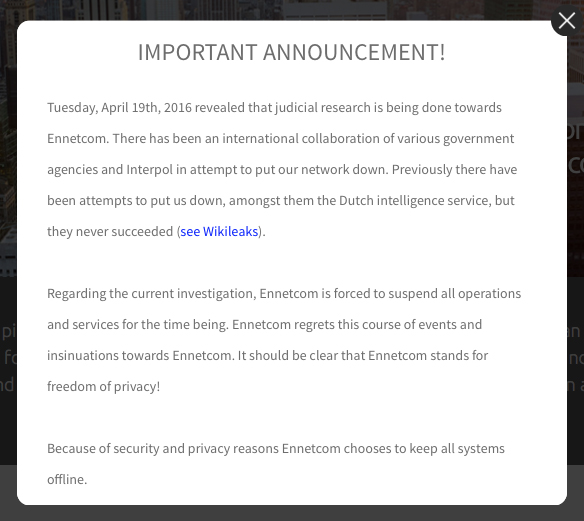 Ennetcom offers to its customers a PGP-encrypted mobile communication network that they can use only via specialized Blackberry handsets that incorporate several layers of encryption, and can be bought from the company for €1,500. It is reported that the network has 19,000 users.

According to the Dutch police’s press release (in Dutch), they copied the contents of multiple servers in the Netherlands, and the Canadian police did the same with a server located in Toronto.

The Dutch police has known for a while that criminals use PGP in order to communicate secretly with each other. It’s still unknown what knowledge they can actually glean from the information stored on the seized and copied servers, but apparently they believe it will come in hand for ongoing investigations.

The users of the PGP-encrypted communication network that was taken offline by the company have previously received a notification by the police on the ongoing investigation. In it, they tried to reassure users who are not involved in crime dealings that the analysis of the server content will focus only on individuals suspected of serious crimes.