Recently released results of a survey by the US Department of Commerce’s National Telecommunications and Information Administration (NTIA) have revealed that security and privacy fears stopped 45 percent of polled households from conducting financial transactions, buying goods or services, posting on social networks, or expressing opinions on controversial or political issues via the Internet.

“Privacy and security concerns deterred each of these important activities in millions of households, and this chill on discourse and economic activity was even more common among online households that either had experienced an online security breach or expressed two or more major concerns about privacy and security risks,” says Rafi Goldberg, an NTIA policy analyst. 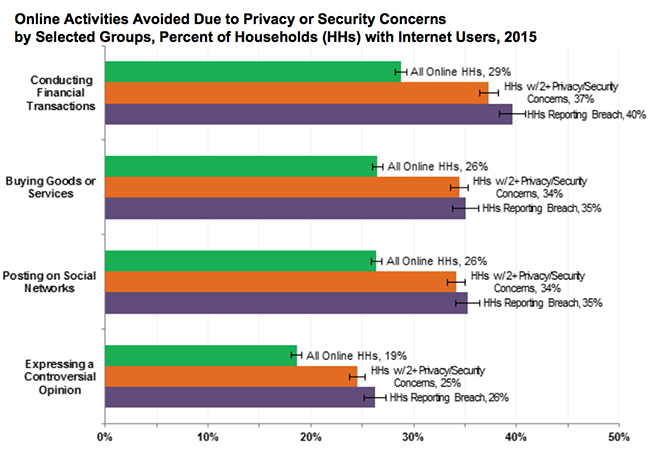 “NTIA’s initial analysis only scratches the surface of this important area, but it is clear that policymakers need to develop a better understanding of mistrust in the privacy and security of the Internet and the resulting chilling effects. In addition to being a problem of great concern to many Americans, privacy and security issues may reduce economic activity and hamper the free exchange of ideas online,” Goldberg noted.

The survey took into consideration answers from 41,000 households which have at least one Internet user.

It seems reasonable that identity theft and credit card fraud fears are much greater than, for example, fears about data collection by the government. Consider that the pollees, if not hit themselves, likely know at least one person that has had their identity stolen or credit card info pilfered and misused.