Technology is an important tool to help companies fight fraud, but many are not succeeding in using data analytics as a primary tool for fraud detection. Meanwhile, fraudsters are leveraging technology to perpetrate fraud, according to a new report by KPMG.

“Companies can use advanced data analytics technology to search for suspicious and unusual business activity amid millions of daily transactions,” said Phillip Ostwalt, partner and Global Investigations Network Leader at KPMG LLP. “However, many are not capitalizing on such technology while fraudsters find new ways to gain access to confidential information, manipulate accounting records and camouflage misappropriations.”

Fraud is less likely to occur in companies with strong controls that monitor for unusual transactions through deploying analytical routines, or where the company invests in resources to defend against fraud, such as an internal audit function. However, despite the increasing threat of newer types of frauds, such as cyber fraud and continued traditional forms of wrongdoing, companies are not focusing on strengthening controls. Weak internal controls contributed to 59 percent of frauds in North America.

“In addition to ensuring internal controls are thoughtfully designed, companies should deploy effective training and instill a culture of integrity so that controls are properly executed,” said Ostwalt. “Companies should also adopt new controls as their risk profiles change. Ongoing risk assessments can help cost-constrained companies ensure they are properly investing in such controls.” 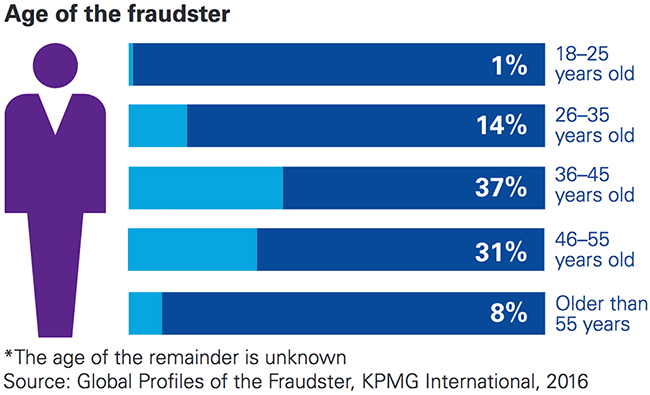 Women narrow the gap – The KPMG study reflected that men are more likely to collude on frauds than women at 66 percent versus 45 percent worldwide, respectively, but women are catching up. Forty-seven percent of fraudster groups included both genders in 2015 versus 34 percent in 2010.

Threat comes from within – Fifty-six percent of North American fraudsters were employed by the company, with more than half being executives or management.