A new survey carried out by analyst firm Freeform Dynamics examines the attitudes and readiness of IT decision makers with regard to intelligent machines and business systems (machines with decision making and learning capabilities). Exploring the fast-paced adoption of these systems, the report looks at the positive impacts already being observed in the commercial world and the potential barriers to even further mainstream adoption over the next decade. 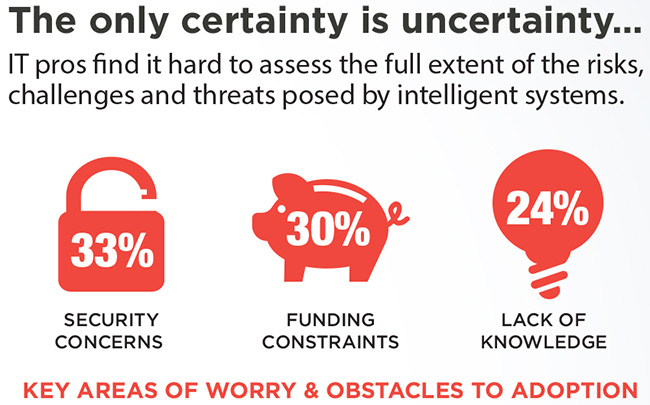 According to the research, investment in intelligent business systems and automation is well underway across the globe. Top current application deployment areas cited by respondents include digital customer engagement systems (55%), process automation and workflow systems (52%), and automated risk monitoring and management solutions (50%). The research further reveals that:

Assessing the full extent of the risks

Despite the speed of adoption, the study reveals that IT decision makers are finding it difficult to assess the full extent of the risks, challenges and threats posed by intelligent business systems. Security concerns (33%), funding constraints (30%) and lack of knowledge (24%) were all identified as areas of worry and named as primary obstacles to adoption and use. To give just one example, a fifth of respondents (20%) said increased ‘noise’ on the network is making it harder to detect malicious activity, with automated/bot access to APIs causing system/application issues and creating unexpected security exposures.

When questioned further, more than two-thirds (68%) of respondents confessed their current network security and access management capabilities were already inadequate or needed strengthening to cope with new intelligent machines, while 72% revealed network traffic monitoring and analysis capabilities also required reinforcing. 72% of respondents said the same applied to their file and document level security and access management systems and protocols.

The impact of intelligent systems

The research highlighted the impact of intelligent systems is being felt right now in the enterprise environment, with IT professionals braced for further challenges:

Looking to the future, the survey revealed IT professionals were also concerned about how to counter the potential impact of intelligent systems activity – including external third party bots, agents and internet-connected ‘things’ – on enterprise networks and infrastructures.

“Organisations are harnessing the transformative powers of intelligent systems to gain competitive advantage. But IT decision makers recognise that, while a force for good, these technologies also expose the enterprise to new internal and external risk vectors,” said Tony Lock, Distinguished Analyst at Freeform Dynamics. “As the pace of adoption increases, there will be no escaping the impact of intelligent systems on the enterprise – regardless of whether or not organisations directly invest in such technologies.”