80 percent of European IT security professionals expect their business to be threatened with a DDoS ransom attack during the next 12 months, according to Corero Network Security.

The research, which polled over 100 security professionals at the Infosecurity Europe conference in London, highlights the growing threat of cyber extortion attempts targeting businesses in the United Kingdom and continental Europe. 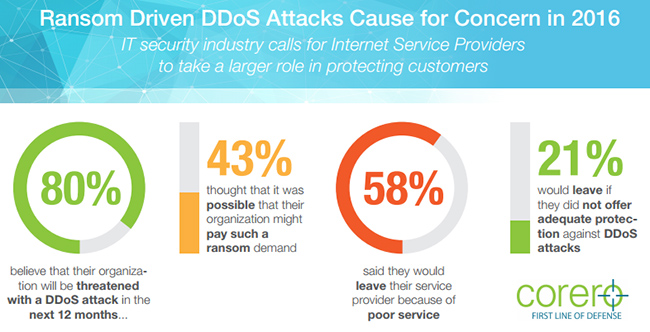 The rise of DDoS extortion campaigns

Last month, (May 2016), the City of London Police warned of a new wave of ransom driven DDoS attacks orchestrated by Lizard Squad, in which UK businesses were told that they would be targeted by a DDoS attack if they refused to pay five bitcoins, equivalent to just over £1,500. Almost half of these IT security professionals (43%) thought that it was possible that their organization might pay such a ransom demand.

“Extortion is one of the oldest tricks in the criminal’s book, and one of the easiest ways for today’s hackers to turn a profit. When your website is taken offline, it can cost businesses over $6500 a minute in lost revenue, so it’s understandable why some organizations choose to pay the ransom. But this is a dangerous game, because just a few willing participants encourage these threats to spread like wildfire. Rather than trying to negotiate with criminals, the only way to beat these attacks is to have a robust, real-time DDoS mitigation system in place, which can defend against attacks and prevent downtime,” said Dave Larson, COO at Corero Network Security.

“Our research data indicates that DDoS ransom attack threats are not only increasing in frequency but also being used by cyber criminals in new and creative ways to extract money from victims. For example, low-level, sub-saturating DDoS attacks are usually used as a precursor to ransomware attacks. Because they are so short – typically less than five minutes in duration – they are usually not detected by security teams and allow hackers to find pathways and test for vulnerabilities within a network which can later be exploited through other techniques,” Larson added.

As DDoS attacks become increasingly sophisticated, many organizations are looking further upstream to their Internet Service Provider to protect them against DDoS threats. The majority of those surveyed (59%) worry that their ISP does not provide enough protection against DDoS attacks, and almost a quarter (24%) of respondents believes that their ISP is to blame if a DDoS attack affects their business.

Furthermore, over half of those surveyed (53%) believe that ISPs are hiding behind net neutrality laws – the concept of treating all online traffic equally – as a way to dodge their responsibilities in terms of protecting their customers from cyber attacks, such as DDoS.

Dave Larson continues, “A telecom company’s role has traditionally been to direct traffic from one destination to another, without passing judgment about the content. Net neutrality, in which carriers treat all data the same, was prized above all else. But the tide of opinion is changing and many customers now want their telcos to deliver not a decaying mélange of Internet traffic and increasingly sophisticated attack vectors, but a ‘clean pipe’ of good traffic, where the threats have been proactively removed. Providers now have a golden opportunity to offer their customers DDoS protection-as-a-service, and open up valuable new revenue streams in the process – or risk losing their customers.”

Almost 60% of those surveyed (58%) said that would leave their service provider because of poor service, and over a fifth (21%) would leave if they did not offer adequate protection against DDoS attacks.