Whenever I travel, I take data I might need with me on a secure USB flash drive.

Ages ago, I would encrypt these files with GPG and move them to a generic USB drive. After that I used the encrypted flash drives that needed a client software for accessing the secure data. Both of these options required software to work, whether a standalone encryption tool, device driver or a tied in application.

iStorage datAshur Pro is a part of the new(er) generation of encrypted flash drives, the ones that have the autentication mechanism on the device – in this case a PIN input pad. 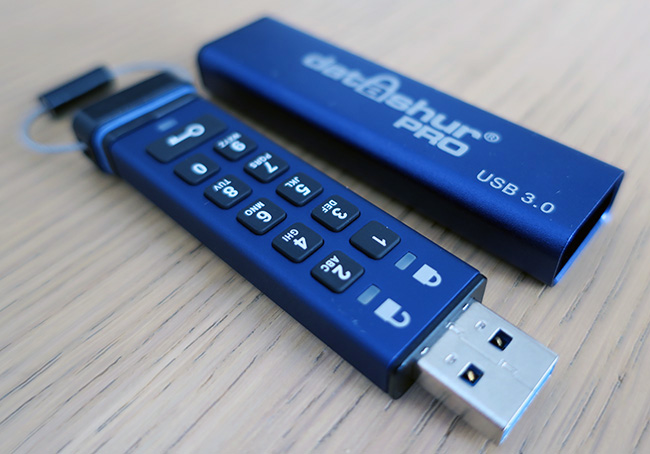 datAshur Pro is easy to use: you enter a valid PIN, plug the drive into the USB slot of your device, and you are set to go.

The device is OS- and platform-independent. It uses real-time military grade XTS-AES 256-bit hardware encryption, its crypto-parameters are protected with SHA-256 hashing, it has protection against brute forcing and its aluminium housing is dust- and water- resistant. datAshur Pro has a couple of certifications pending (CESG CPA Foundation Level and NLNCSA Level 2) and it recently received the coveted Federal Information Processing Standard (FIPS) 140-2 Level 3 accreditation.

Direct authentication on the device prevents a number of potential security issues from arising if you connect it to a compromised computer. 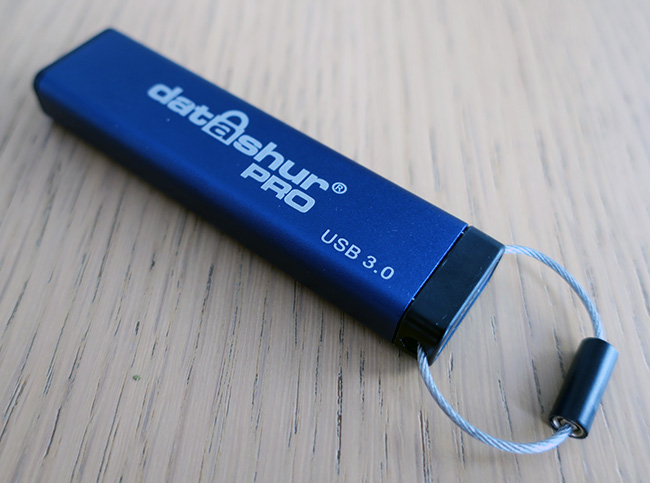 iStorage datAshur Pro enforces a strict PIN policy. The PIN must be at least 7 digits long, and can go up to 15 digits. It cannot consist of all consecutive numbers (i.e. 7654321) or just one repeated digit (e.g. 4444444). Every device is shipped with the default PIN of 11223344, so you’ll need to follow the simple instructions provided in the box to change it.

This PIN is for the user, but you can set up an admin PIN, as well. This feature is used for corporate deployment – it provides the means of managing employees’ PIN in the case they forget it, or to retrieve corporate data from a device when an employee leaves the company. 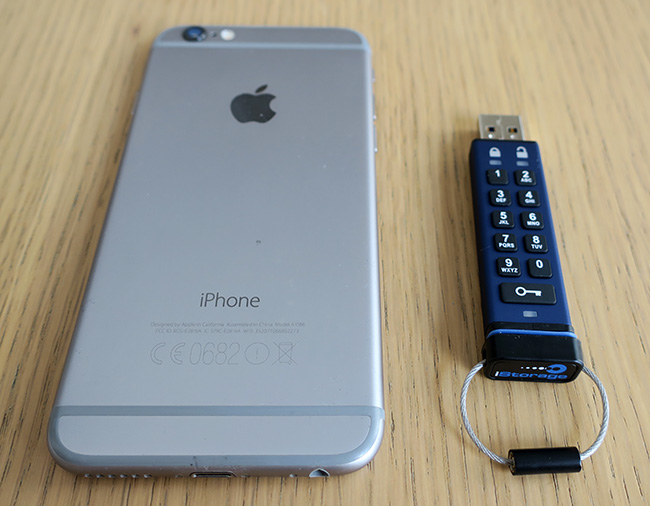 I’ve recently reviewed an encrypted hard drive by the same company, and noted that there is no need of doing speed tests for such a product, as I wanted to focus more on the security aspects. In the case of a portable USB drive used for moving data between computers quickly, the data transfer speed test is something that you might be interested in.

Comparing transfer speeds between an encrypted USB flash drive and a regular one might seem like mixing apples and oranges, but this comparison was done just as a reference point on what you might expect with the device of this calibre. I’ve used the same computer, the same USB ports and for each file size and the device there were three reccuring tests. The figures in the table below are average numbers of seconds needed to transfer the specified file to a device. The devices tested were iStorage datAshur Pro 16GB and SanDisk Ultra Fit USB 3.0 Flash Drive 64GB. 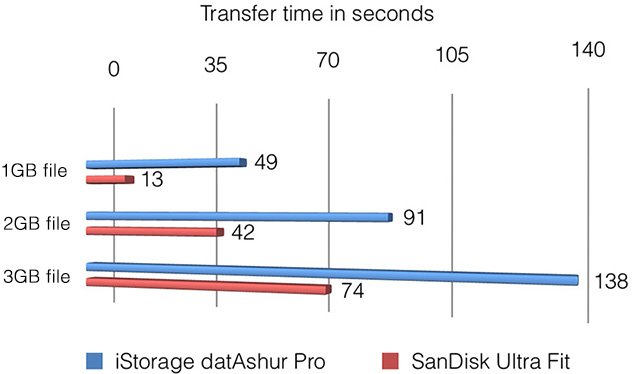 As noted in the official documentation, read/write speeds should be around 116 and 43 MB/s respectively.

I got the device at this year’s Infosecurity Europe conference in June, and soon after it replaced my exisiting secure flash drive solution. Tough security under the hood, an innovative authentication method, and the fact that it’s OS-independent make iStorage datAshur Pro a terrific product.