The Linux Foundation analyzed the work done by over 13,500 developers over more than a decade, to provide insight into the Linux kernel development trends and methodologies used by thousands of different individuals collectively to create some of the most important software code on the planet. 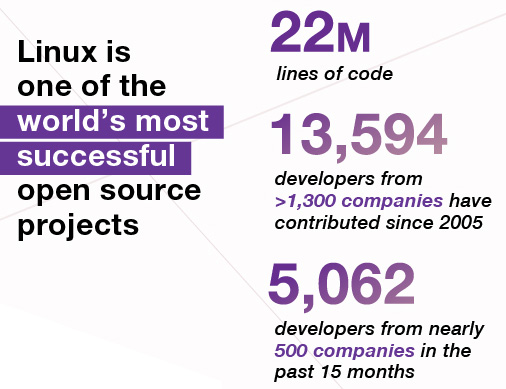 The Outreachy program, which provides open source internships to underrepresented groups, ranks #13 for contributions to the Linux kernel during this last cycle with the interns contributing 1.4 percent of the patches since Linux kernel 3.18. The complete top 30 contributing organizations can be seen in the full report.

The rate of Linux development continues to increase, as does the number of developers and companies involved in the process. The average number of changes accepted into the kernel per hour is 7.8, up from 7.71 in the last report, which translates to 187 changes every day and nearly 1,310 per week. The average days of development per release remained steady at 66 days, with every release spaced either 63 or 70 days apart, providing significant predictability. 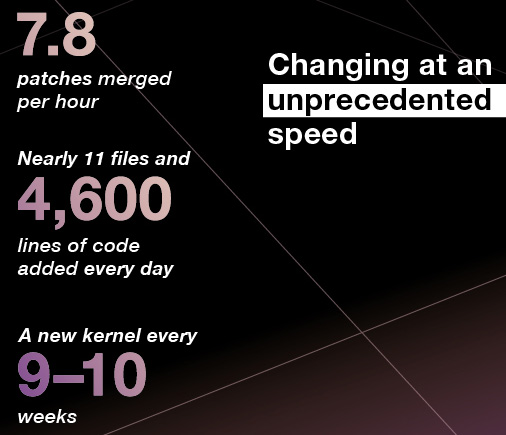 “Even after 25 years, Linux still serves as an example of how collaborative development can work, which can be applied to other open source projects,” said Jim Zemlin, executive director of The Linux Foundation.

The report is co-authored by Jonathan Corbet, Linux kernel developer and editor of LWN.net, and Greg Kroah-Hartman, Linux kernel maintainer and Linux Foundation fellow. It is available here (registration required).