While cloud adoption continues to accelerate, few organizations are maximizing the value that cloud can offer, according to IDC. The increased cloud adoption is being fueled by cloud-native applications, including security and the IoT cloud-based solutions.

On average, the most “cloud advanced” organizations see an annual benefit per cloud-based application of $3 million in additional revenues and $1 million in cost savings. These revenue increases have been largely the result of sales of new products and services, gaining new customers faster, or accelerated ability to sell into new markets.

The study also reveals that 95 percent of those leading organizations with optimized cloud strategies have built a hybrid IT environment that uses multiple private and public clouds based on economics, location and governance policies.

Hybrid cloud adoption (public cloud and private cloud services) varies by country, with Korea and Japan among the countries with the greatest percentage of organizations using a mix of public cloud services and dedicated assets. The study notes the percentage of organizations with hybrid cloud adoption in the following countries: 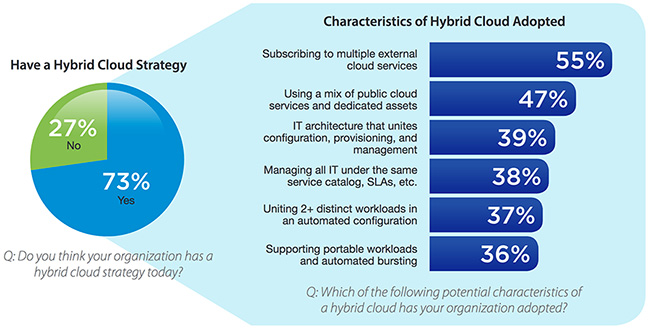 “As this global cloud adoption study reveals, most organizations are still attempting to optimize their cloud strategies, but the 3 percent of organizations that have reached the highest level of adoption are reaping the most benefits. It also underscores that multicloud environments are the default scenario among a majority of companies worldwide, and successfully managing multicloud is a key attribute of mature cloud strategies,” said Robert Mahowald, Group VP, SaaS & Cloud SW, IDC.