The use of information and communication technologies in the public sector, specifically online government services, is a key factor for being targeted by cybercriminals. Technological advances have made it possible to store personal data in digital format, a great benefit to users, but also a highly-prized target. 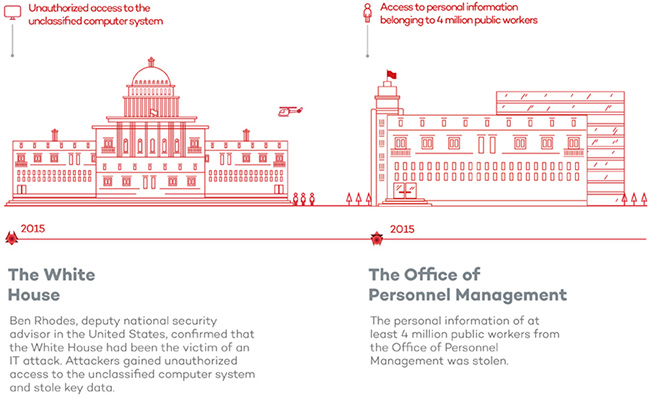 While cyberccrime is now more prevalent than ever, attacks against the public sector are not brand new. Panda Security outlines several major government breaches over the last decade, including these striking examples:

It is becoming more evident that cybercriminals are seeing the value in this sector because there is so much proprietary and private data at stake. The Government Accountability Office stated that in 2015 alone, there were more than 77,000 cyber attacks against federal agencies.

New crimes including cyber terrorism, cyber espionage and hacktivism are on the rise. The secret phase of the cyberwar against Iran began during the last decade with espionage carried out by the U.S. and Israeli intelligence services.

And along with insider attacks such as Edward Snowden’s exposé of the NSA, hacktivism has become a serious threat to government and public agencies. The FBI has also confirmed the hacking of electoral databases by foreign hackers, just three months from the election.

The emergence of new global players with varying motivations, combined with their ability to act in any security dimension, hinders the identification of aggressors and decreases the ability of countries to adequately respond.

Current legislation is not adapted to the new cybercrime dynamic or to new technological or data management demands.

To prevent new attacks on public agencies, a common regulatory and legislative framework is needed, with responsibilities shared between states.