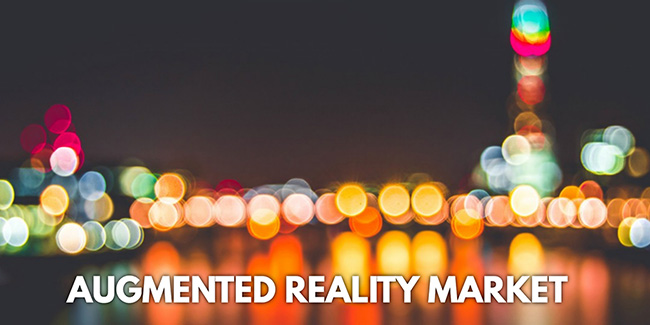 The increasing scope of applications across different industries, manufacturing, medical, retail, game, and automotive, all industries really, is expected to drive demand over the forecast period to these unprecedented levels, reaching into the trillion dollar market arenas soon. AR technology is in the nascent stage with a huge growth potential, and has attracted large investments contributing to the industry growth.

Adoption of AR technology in the enterprise is growing. AR headsets and glasses are used in manufacturing, logistics, remote service, retail, medical, and education.

One popular AR application is providing ‘see-what-I-see’ functionality, enabling off-site specialists to provide real-time guidance and expertise to troubleshoot an issue. Others superimpose process steps by step information on dials and switches in workflow situations.

“These game based and industrial end-to-end process IoT augmented reality modular Augmented Reality (AR) markets are anticipated to reach $7 trillion by 2027, growing in some cases at the same pace we have seen from Pokémon GO augmented reality. Pokémon GO grew to a massive 45 million daily active users per day after two months in the market, with the market reaching $250 million for the vendor Niantic by September 2016 after two months starting from zero.”

Phenomenal growth is anticipated to come from implementation of step-by-step procedure virtual reality modules that are used to manage systems. Every business executive in the world wants to have an IT structure agile enough to manage phenomenal growth, should that be necessary, the aim is to construct augmented reality modules that address the issues brought by the Internet of Things (IoT).

IoT takes the data from sensors, superimposes analytics on collected data, turns the data into information, and streams alerts back to users that need to take action.