Computer systems of the Northern Lincolnshire and Goole NHS Foundation Trust have been hit by a “virus”, and the HNS Trust reacted by shutting down the majority of them. 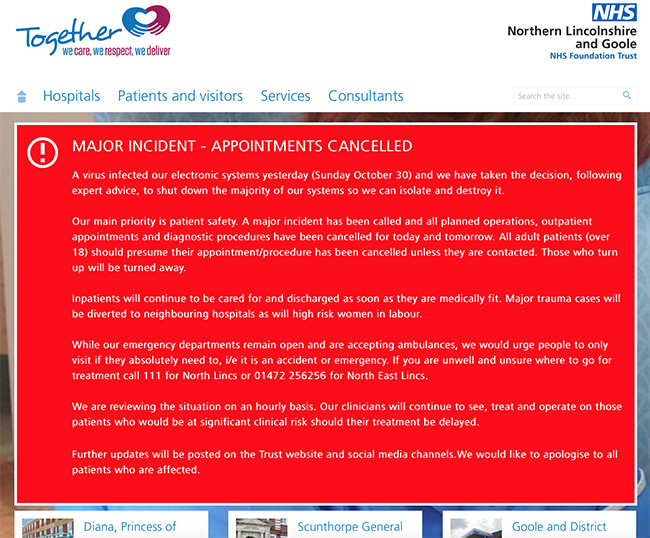 The Trust operates three hospitals: Diana, Princess of Wales Hospital in Grimsby, the Scunthorpe General Hospital, and the Goole and District Hospital in Goole.

Following the shutdown, all planned operations, outpatient appointments and diagnostic procedures at the three hospitals have been cancelled for Monday and Tuesday.

Antenatal and chemotherapy appointments have not been cancelled, the emergency departments are still working.

“We are reviewing the situation on an hourly basis. Our clinicians will continue to see, treat and operate on those patients who would be at significant clinical risk should their treatment be delayed,” the Trust said.

The infection was detected on Sunday, and the shutdown performed on Monday, so that the virus can be isolated and destroyed.

No details about the malware have been shared, but it seems likely that they have been hit with ransomware.

Earlier this year, cyber security company NCC Group revealed that 47% of NHS Trusts in England have been hit by ransomware in the past year.

There is still no news on when the systems will be up and running again, and the hospitals will return on operating as usual.