For the sixth year in a row, Internet freedom is declining.

According to the latest Freedom on the Net report, 67 percent of all Internet users now live in countries where online criticism of the government, ruling family or the military is subjected to censorship, and such activity can result in individuals getting arrested. 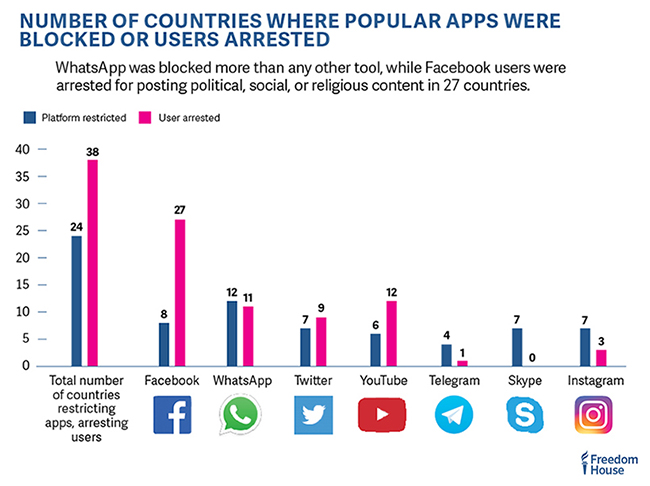 Also, more governments have come to realize the power of social media and messaging apps, and are actively trying to censor them or prevent their use, particularly during anti-government protests, but also because they help thwart their surveillance efforts.

“The increased controls show the importance of social media and online communication for advancing political freedom and social justice. It is no coincidence that the tools at the center of the current crackdown have been widely used to hold governments accountable and facilitate uncensored conversations,” says Freedom House, the NGO that compiled the report that focuses on developments that occurred between June 2015 and May 2016.

“Authorities in several countries have even resorted to shutting down all internet access at politically contentious times.”

The “problem” with some communication apps is that they encrypt the exchanges, but it’s interesting to note that the use of some online voice and video calling apps is being blocked or restricted in a number of countries, mainly because they eat away at the profit margins of national telecommunications firms.

China, Syria, Iran, Ethiopia and Uzbekistan lead the pack of countries with the smallest amount of Internet freedom. On the other end of the spectrum are Estonia, Iceland, Canada, the US, and Germany. 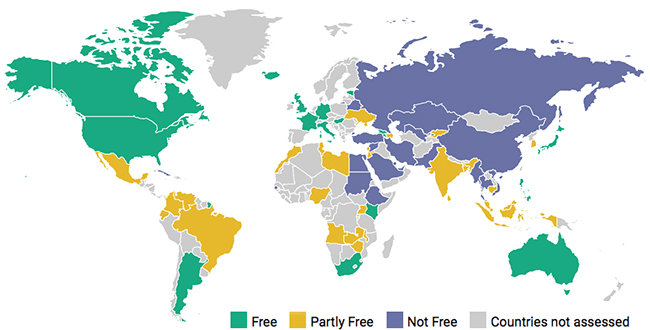 “Of the 65 countries assessed, 34 have been on a negative trajectory since June 2015. The steepest declines were in Uganda, Bangladesh, Cambodia, Ecuador, and Libya,” Freedom House noted.

“In Uganda, the government made a concerted effort to restrict internet freedom in the run-up to the presidential election and inauguration in the first half of 2016, blocking social media platforms and communication services such as Facebook, Twitter, and WhatsApp for several days. In Bangladesh, Islamist extremists claimed responsibility for the murders of a blogger and the founder of an LGBTI magazine with a community of online supporters. And Cambodia passed an overly broad telecommunications law that put the industry under government control, to the detriment of service providers and user privacy. Separately, Cambodian police arrested several people for their Facebook posts, including one about a border dispute with Vietnam.”

While there have been improvements in 14 other countries, they are small, and not always the result of positive government actions.

The tug of war between protestors, digital activists, and companies offering social media services and communication apps on one side, and a wide variety of governments on the other continues.