Let’s be honest. Our online world is judged on how others view us, or as the psychologist Caldini would put it social validation. Want to buy a product? Well how many people gave it five stars? I refuse to now try something new unless someone has been there before, took the time to review it, and then post it on a social network of some description.

Indeed this approach goes even beyond products or services, with judgements on social networks based on recommendations or followers that in some way defines each of us.

Reputations are being built on such platforms, and yet a large proportion are now manipulated and automated to the extent that the very integrity of this environment has to be called into question. For example one study cited claimed that “average value of a like for non-profits seeking to attract donations” was in excess of $200.

Naturally such a figure invokes the rise of an industry creating click-farms where low paid workers click for cents, or the use of malware to piggyback sessions of legitimate users are equally on the rise. Indeed in our predictions report for 2017, the rise of faceliker malware continues to grow. 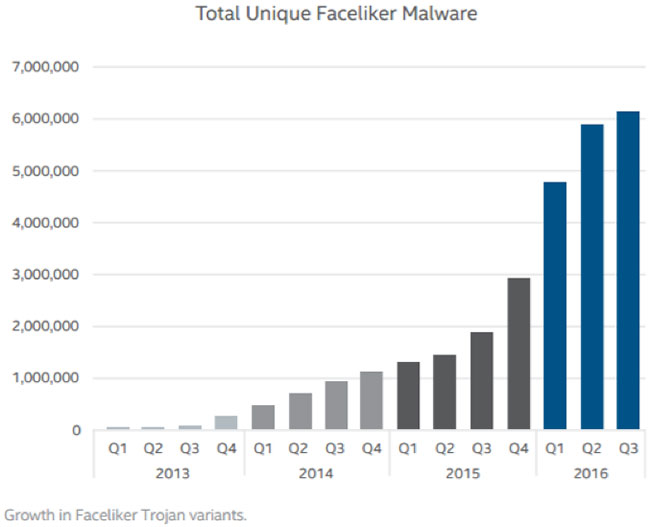 Industry response to the rise in such tactics has been commendable, but the reality is that consumers are likely to think that FakeSpot is a make-up product rather than a site to analyse reviews of products. Now before we as an industry take to Twitter and bemoan the rise of such practices, our own ‘community’ itself has begun using techniques that make a mockery of the CIA triad that we all live by.

In a move that shocked me, one particularly troll decided to use a fake account with purchased followers to conduct a smear campaign that filled up my notifications, which as it later turned out is likely someone within the Infosec community. A community of course that cites trust, integrity, and transparency as its foundation and yet none of these were displayed when a fake account was created in order to attack peers in the same industry.

Whilst the focus has been on Confidentiality, and Availability the integrity of the online world around us continues to be eroded through practices that may not necessarily garner the same type of headlines or indeed be judged as unlawful, are clearly unethical and misleading.

A claim from one of the services selling Likes boasts that “Virtually every page has started buying likes” and whilst this will work short-term, a reputation of trust and integrity isn’t something that can be easily acquired.