After surveying 250 respondents at CES 2017, the Open Connectivity Foundation (OCF) concluded that more than 60 percent of respondents consider standardization and interoperability when it comes to purchasing connected devices, cybersecurity concerns, and overall technological innovation in our society.

What do you think is the single biggest limiting factor to universal adoption of connected devices? 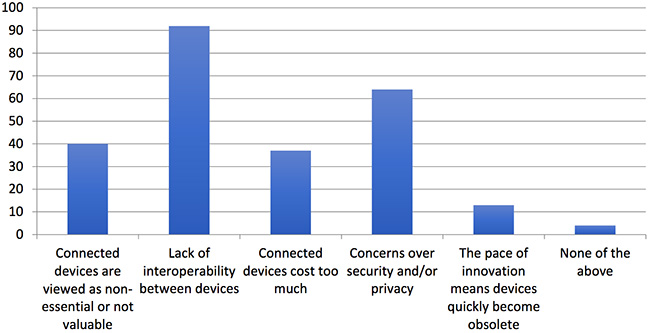 The IoT market is growing and changing rapidly, but the lack of industry consensus on open standards and protocols hinders that growth. Without seamless interoperability among connected devices, regardless of brand or manufacturer, the Internet of Things cannot reach its full potential. However, consumers are beginning to recognize the need for open standards to allow IoT to integrate into our lives and improve our society.

“These survey results are a clear indicator that the issue of interoperability has come to the forefront of consumer concerns when it comes to IoT,” said Joonho Park, executive director of OCF. “With a unifying standard in place, which provides a consistent standard of security, privacy and device definitions, we can defragment the market to ensure the future entails a world where all devices, despite vendor, can communicate with one another and the Internet of Things can reach its full potential.”

The IoT industry is growing rapidly

Would you be more likely to purchase connected/IoT devices if they carried a rating or certification as to
their level of security?

Interoperability is a main concern for consumers