BigPanda’s annual survey evaluated the current IT monitoring landscape, including a review of the most popular tools for monitoring, deployment, and ticketing/collaboration; the biggest challenges facing IT pros in the upcoming year; and insights into monitoring strategy satisfaction and performance. 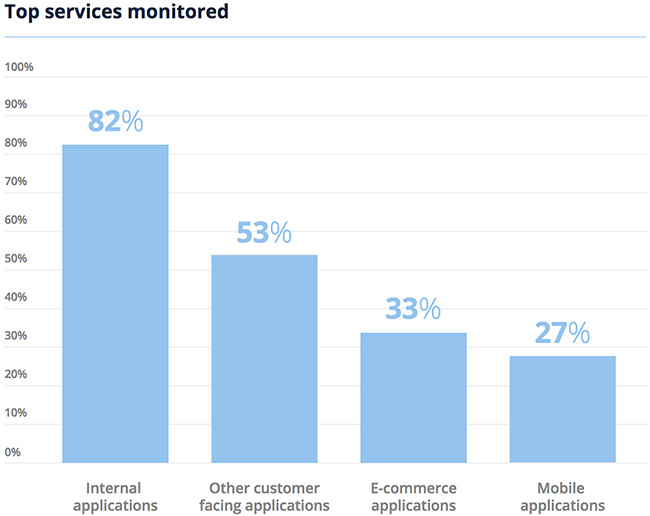 Conducted in December, 2016, the survey polled more than 1,500 IT professionals across a wide range of industries, including telecom, technology, the Internet and electronics, finance and financial services, and healthcare and pharmaceuticals, as well as education and manufacturing. Respondents skewed towards larger enterprises, with 53 percent representing organizations with more than 1,000 employees.

Notably, team size demonstrated the opposite trend, with 43 percent of respondents reporting a team of less than ten, indicating that IT leaders are perhaps facing increased pressure to expand their capacity, without increasing headcount. The survey results also noted a distinct uptick in the reported frequency of both code and infrastructure change versus 2016 and an increase in the adoption of DevOps principles and methodologies – both for enterprises and SMBs.

IT departments under pressure to “do more with less”

Feeling the pain of the IT skills gap, IT leaders are struggling to keep their teams staffed with qualified candidates, with 82 percent of respondents stating that successfully staffing and retaining qualified staff members is a key concern for 2017.

The IT stack gets more complex

IT practitioners are relying on a growing number of tools to do their job, as the underlying systems they must support grow more agile and complex. According to survey findings, the average practitioner currently uses six or seven tools on a regular basis, and more than half of respondents reported plans to further expand their stack in 2017. This, paired with the fact that the frequency of both code and infrastructure change is on the rise, points to the growing complexity and noisiness of today’s IT systems.

Implementing a defined monitoring strategy makes identification and remediation of service disruptions easier, and organizations that consider their monitoring to be strategic also are more likely to build monitoring into code, agree that developers are actively involved in supporting applications, and consider their organization to be agile. A clear correlation exists between monitoring strategy satisfaction and the volume of alerts that can be investigated and resolved within 24 hours.

For the second year in a row, customer satisfaction far outranks all other performance metrics in BigPanda’s survey. Customer satisfaction was cited as a KPI by 73 percent of the respondents, while the second most popular metric, SLA compliance, was cited by just 45 percent, indicating the increased role that the customer experience plays as a leading competitive differentiator.

This data signals an important shift in the way that IT performance is valued, reflecting a new focus on outcomes more closely associated with business services.

“Companies everywhere are recognizing the crucial role that the digital customer experience plays as a key competitive differentiator,” commented Assaf Resnick, CEO of BigPanda. “Digital customers have come to expect constant availability and high quality of service as standard, so the difference between ‘good’ and ‘great’ now lies in factors such as usability, personalization, cross-platform support, and customer service. As a result, we’re going to see IT performance increasingly measured against the success of the business – a fact reflected by our survey, with KPIs such as customer satisfaction and SLA compliance taking the lead over metrics one might consider ‘traditional’ for IT, such as MTTR and incident volume. This is why it is critical for IT leaders to develop a future-proofed monitoring process that can effectively scale with organizational growth and handle the increased complexity and agility of modern IT systems.”