Nearly seven in 10 executives and over half of IT professionals revealed that they would prefer having a single cloud services provider handling their varied hosted deployments, according to Evolve IP.

The survey also revealed that for the second consecutive year IT professionals and executives believe that when facing hardware malfunctions, malicious attacks and environmental disasters, their organization’s data is safer in the cloud than on-premises. The survey of more than 1,500 professionals, which provides current cloud adoption trends and future cloud deployment insights, also revealed that just under nine in 10 organizations plan to move new or additional services to the cloud in the next three years.

Cloud sprawl, which takes place when multiple people and or departments deploy disparate hosted services, has firmly taken hold in many organizations with survey recipients indicating that their business had, on average, over 4 major cloud services in the cloud today – not including a breakout of specific SaaS applications.

Additionally, 88 percent planned on moving more services to the cloud over the next three years including Microsoft applications, call centers and phone systems. The growth and sprawl has left executives and IT professionals feeling out of control and desiring consolidation. As a result, 68 percent of executives and 52 percent of IT professionals now desire having a single cloud services provider for their various cloud services.

Data security also continued to be an ongoing concern, noted by 50.5 percent of respondents. This year’s survey again asked where executives and IT professionals felt their data was safest under three common risk scenarios: environmental disasters, malicious attacks (e.g. cyberattacks) and hardware failure. 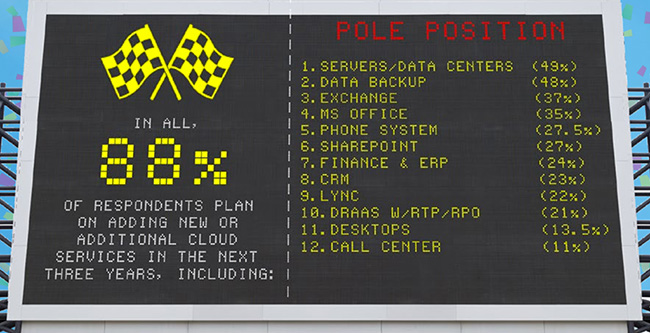