Through its website, the FBI’s Internet Crime Complaint Center (IC3) accepts complaints about Internet-facilitated criminal activity, and forwards them to the appropriate law enforcement agencies (both in and outside the US) to investigate.

The only condition that has to be satisfied in order for a report to be considered and acted upon is that either the victim or the alleged subject of the crime is located within the United States.

The IC3 is, therefore, in the perfect position to offer concrete information about the quantity and nature of such criminal activities, as well as to pinpoint trends relating to them.

The latest annual IC3 Internet Crime Report, encompassing all complaints received in 2016, has been published, and shows that in the past year, the top three crime types reported by victims were non-payment and non-delivery, personal data breach, and payment scams.

Also, that victims of Business Email Compromise (BEC), romance and confidence fraud, and non-payment and non-delivery scams were the ones who, in total, lost the most money. 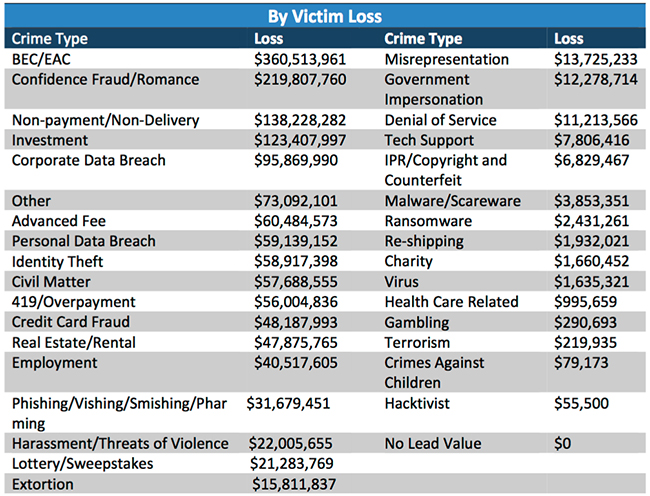 A comparison with the table (below) on the number of victims that were hit with the same list of crimes yields some interesting insights.

For example, it is no wonder that BEC scams are so popular with criminals – on average, a BEC scam victim experiences around $30,000 of losses, while a confidence fraud/romance scam victim loses on average around $1,700. In short, the scammers must invest much less effort and time and get considerably more money. 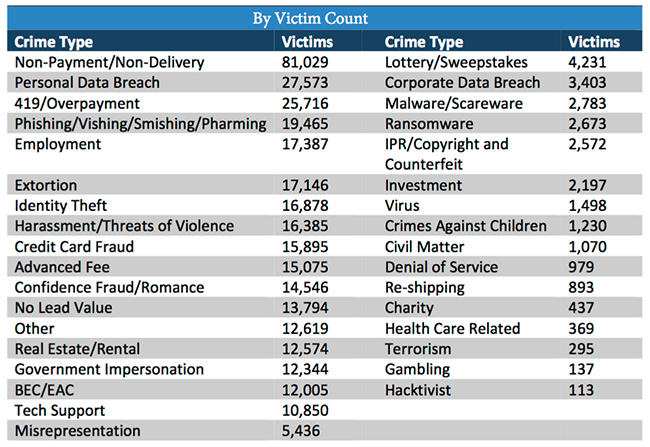 Of course, it has to be noted that not all victims make a complaint. In fact, only an estimated 15 percent of US fraud victims report the crimes to law enforcement. And I would venture to guess that, for example, BEC victims are more likely to report the scam than romance scam victims because they feel more shame for having fallen for it.

Where are the victims?

A table with the victim count and losses according to age groups shows that older people lose more money to fraudsters. Perhaps it’s partly because they have more money at their disposal than youngsters?

In the US, California, Texas and Florida are the states from which most fraud victims who complain to the IC3 come from.

Not counting victims from the US, Canadian, Indian, UK, and Australian are the most numerous.