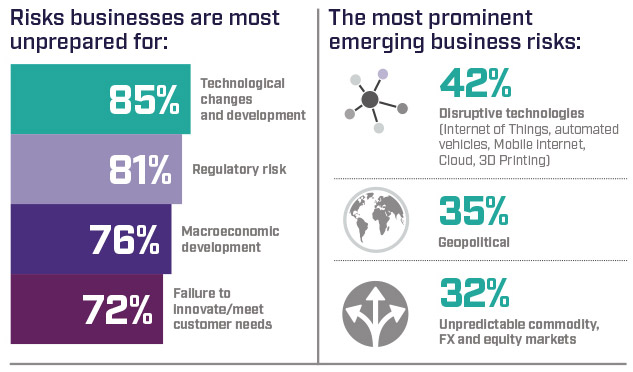 Businesses feel more confident in the macroeconomic environment, and may reflect improvements in governance, risk management and business continuity planning. The macro risk trends executives expect to have the most impact in the next 10 years include regulatory risk (19 percent), technological changes (16 percent) and increasing competition (13 percent).

“Executives are adjusting to a faster rate of change and more complex changes in their businesses,” said Vicky Gregorcyk, leader of BDO’s Risk Advisory Services practice. “Threats that were once blips on the horizon are now front and center. To manage them, risk management professionals will need to balance the pace at which they adapt business models to seize new opportunities with their implementation and oversight of risk management practices.”

Turbulence in the environment and geo-political sphere

The past year’s rise in populist sentiment and political agendas across the globe, the election of President Trump and the Brexit vote are leaving waves in their wake. Three-fourths of American respondents said the unpredictable geopolitical and economic environments would impact their business this year. Almost 8 in 10 (78 percent) of European respondents said the same.

Similar turbulence is rocking the natural world. While last year was relatively benign in terms of the number of major catastrophes, natural and man-made disasters caused total economic losses to the tune of $158 billion, according to Swiss Re sigma.

82 percent of global business leaders say they are not ready to tackle the challenge of technology changes and development. 88 percent of CEOs say innovation and the ability to embrace technological change are the two areas for which their businesses are most unprepared.

While new technologies serve up a buffet of opportunity for companies to improve their products, build efficiencies and drive profitability, arguably the biggest challenge to implementing new technologies is managing cybersecurity risk. According to IBM Security, there was a staggering 6,000 percent rise in ransomware attacks in 2016.

To see the implications across national borders and industry lines, look no further than June’s WannaCry attack, which comprised 75,000 ransomware attacks in 153 countries and an estimated 3,300 infections in the U.S. And the fallout can be severe: IBM and Ponemon estimate a data breach costs companies $4 million on average. 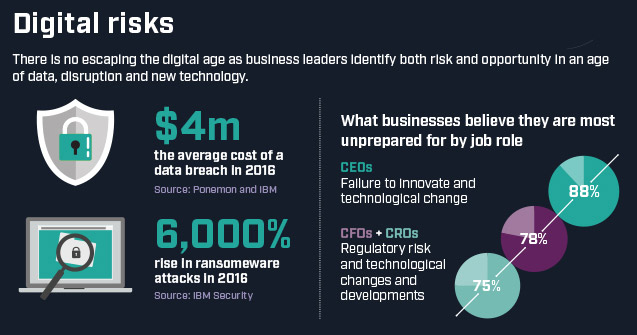 Nine years on from the height of the global financial crisis, business leaders remain concerned about their ability to adapt to compliance pressures. With regulators addressing a variety of issues related to the conduct of financial services firms, 85 percent of leaders in the financial services sector identified regulatory risk as the biggest risk for which their firms are unprepared.

The theme of business resilience continues, and with new corporate governance codes raising the bar on risk management, there is growing recognition that responsibility for risk management ultimately comes from the top.

“The risks we’ve identified require a multifaceted and agile approach with a unique sensitivity to the numerous players involved in each discussion,” said Nigel Burbidge, Partner and Global Chair for Risk and Advisory Services at BDO LLP. “By starting the discussion, we come a step closer to finding the right road ahead, working together to become more resilient to risk and securing success for our future.”

The 2017 BDO Global Risk Landscape Report asked 500 C-suite leaders, board and audit committee members in all major industries in 55 countries, including the U.S. and across Europe, the Middle East, Africa, Asia and the Americas, what they see as the biggest risks facing their businesses now and into the future.