Just a few short weeks after dark web market Alpha Bay was shut down, Hansa Market is now also shuttered. After Alpha Bay’s shutdown, many users flocked to Hansa Market, which was touted as the most secure on the dark web. 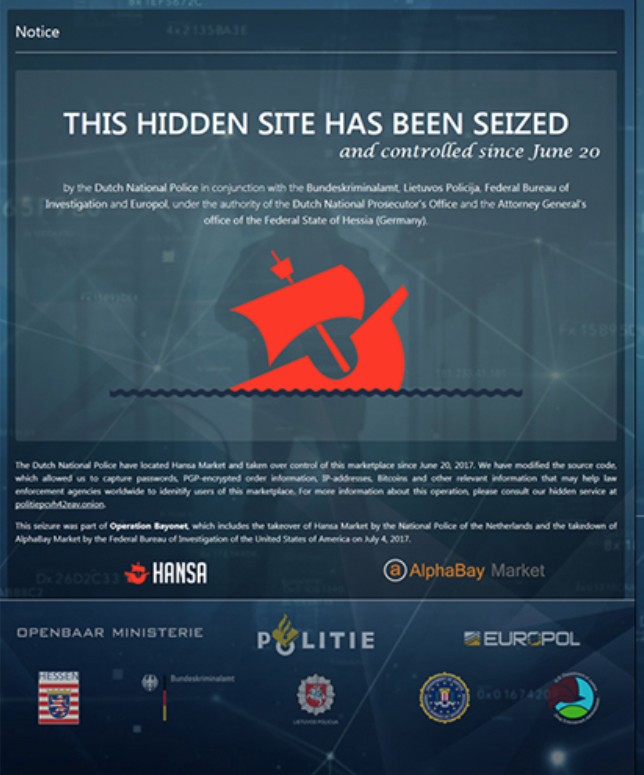 As users are starting to congregate on Reddit to discover what is happening, Europol has released a confirmation of the market’s downfall.

“Europol has been supporting the investigation of criminal marketplaces on the Dark Web for a number of years,” the organization noted.

“With the help of Bitdefender, an internet security company advising Europol’s European Cybercrime Centre (EC3), Europol provided Dutch authorities with an investigation lead into Hansa in 2016. Subsequent enquiries located the Hansa market infrastructure in the Netherlands, with follow-up investigations by the Dutch police leading to the arrest of its two administrators in Germany and the seizure of servers in the Netherlands, Germany and Lithuania.”

According to the press release, the Dutch National Police has taken over the Hansa marketplace on 20 June 2017 under Dutch judicial authorisation. Since then, they have been using it to covertly monitor criminal activities on the platform until it was shut down today (20 July 2017).

According to the notice posted by the Dutch Police on the Hansa Market’s main page, they have modified the source code of the site, and that allowed them to capture passwords, PGP-encrypted order information, IP addresses, Bitcoins, and other relevant information that many help law enforcement agencies worldwide to identify users of the marketplace.

“In the past few weeks, the Dutch Police collected valuable information on high value targets and delivery addresses for a large number of orders. Some 10 000 foreign addresses of Hansa market buyers were passed on to Europol,” the agency claims in the press release.

“In the meantime, an FBI and DEA-led operation, called Bayonet, was able to identify the creator and administrator of AlphaBay, a Canadian citizen living a luxurious life in Thailand. On 5 July 2017, the main suspect was arrested in Thailand and the site taken down. Millions of dollars worth of cryptocurrencies were frozen and seized. Servers were also seized in Canada and the Netherlands.”

“By acting together on a global basis the law enforcement community has sent a clear message that we have the means to identify criminality and strike back, even in areas of the Dark Web. There are more of these operations to come,” Europol Executive Director Rob Wainwright promised.