The hackers who’ve breached HBO and supposedly made off with 1.5TB of the company’s data have released a second data dump. 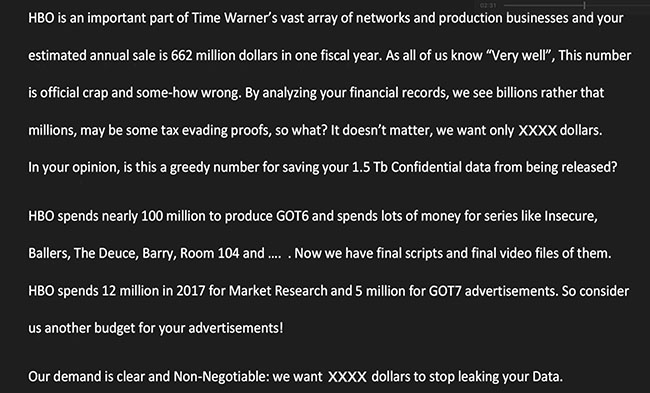 According to the Associated Press and Dissent Doe (at DataBreaches.net), the latest leak includes:

Finally, it also includes the (undated) ransom note in a video, in which the hackers claim that:

In the ransom note, the asked-for ransom amount has been redacted, but we’re probably talking about millions. And, since they’ve leaked data again, it’s pretty safe to assume HBO hasn’t paid the ransom.

HBO spokesperson Jeff Cusson told Wired that their forensic review is still ongoing, but that, so far, there is no reason to believe their email system as a whole has been compromised. They continue their investigation of the breach with the help of outside cybersecurity firms and law enforcement.

The company expects that more data will be leaked by the attackers, but there has been no mention of paying the ransom.