Researchers have sent a quantum-secured message containing more than one bit of information per photon through the air above a city. The demonstration showed that it could one day be practical to use high-capacity, free-space quantum communication to create a highly secure link between ground-based networks and satellites, a requirement for creating a global quantum encryption network. 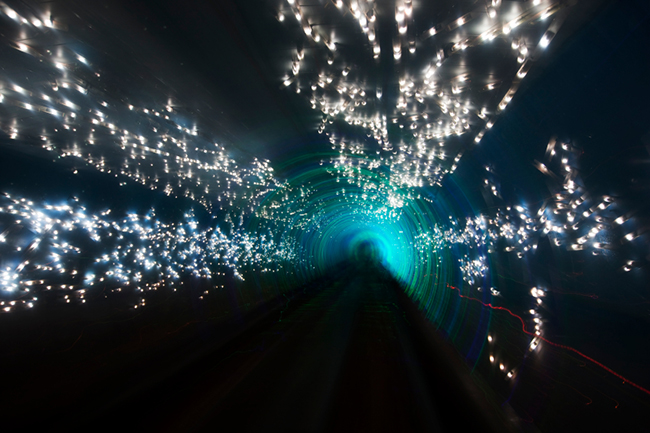 Quantum encryption uses photons to encode information in the form of quantum bits. In its simplest form, known as 2D encryption, each photon encodes one bit: either a one or a zero. Scientists have shown that a single photon can encode even more information — a concept known as high-dimensional quantum encryption — but until now this has never been demonstrated with free-space optical communication in real-world conditions. With eight bits necessary to encode just one letter, for example, packing more information into each photon would significantly speed up data transmission.

“Our work is the first to send messages in a secure manner using high-dimensional quantum encryption in realistic city conditions, including turbulence,” said research team lead, Ebrahim Karimi, University of Ottawa, Canada. “The secure, free-space communication scheme we demonstrated could potentially link Earth with satellites, securely connect places where it is too expensive to install fiber, or be used for encrypted communication with a moving object, such as an airplane.”

The researchers demonstrated 4D quantum encryption over a free-space optical network spanning two buildings 0.3 kilometers apart at the University of Ottawa. This high-dimensional encryption scheme is referred to as 4D because each photon encodes two bits of information, which provides the four possibilities of 01, 10, 00 or 11.

In addition to sending more information per photon, high-dimensional quantum encryption can also tolerate more signal-obscuring noise before the transmission becomes unsecure. Noise can arise from turbulent air, failed electronics, detectors that don’t work properly and from attempts to intercept the data. “This higher noise threshold means that when 2D quantum encryption fails, you can try to implement 4D because it, in principle, is more secure and more noise resistant,” said Karimi.

Today, mathematical algorithms are used to encrypt text messages, banking transactions and health information. Intercepting these encrypted messages requires figuring out the exact algorithm used to encrypt a given piece of data, a feat that is difficult now but that is expected to become easier in the next decade or so as computers become more powerful.

Given the expectation that current algorithms may not work as well in the future, more attention is being given to stronger encryption techniques such as quantum key distribution, which uses properties of light particles known as quantum states to encode and send the key needed to decrypt encoded data.

Although wired and free-space quantum encryption has been deployed on some small, local networks, implementing it globally will require sending encrypted messages between ground-based stations and the satellite-based quantum communication networks that would link cities and countries. Horizontal tests through the air can be used to simulate sending signals to satellites, with about three horizontal kilometers being roughly equal to sending the signal through the Earth’s atmosphere to a satellite.

Before trying a three-kilometer test, the researchers wanted to see if it was even possible to perform 4D quantum encryption outside. This was thought to be so challenging that some other scientists in the field said that the experiment would not work. One of the primary problems faced during any free-space experiment is dealing with air turbulence, which distorts the optical signal.

For the tests, the researchers brought their laboratory optical setups to two different rooftops and covered them with wooden boxes to provide some protection from the elements. After much trial and error, they successfully sent messages secured with 4D quantum encryption over their intracity link. The messages exhibited an error rate of 11 percent, below the 19 percent threshold needed to maintain a secure connection. They also compared 4D encryption with 2D, finding that, after error correction, they could transmit 1.6 times more information per photon with 4D quantum encryption, even with turbulence.

“After bringing equipment that would normally be used in a clean, isolated lab environment to a rooftop that is exposed to the elements and has no vibration isolation, it was very rewarding to see results showing that we could transmit secure data,” said Alicia Sit, an undergraduate student in Karimi’s lab.

As a next step, the researchers are planning to implement their scheme into a network that includes three links that are about 5.6 kilometers apart and that uses a technology known as adaptive optics to compensate for the turbulence. Eventually, they want to link this network to one that exists now in the city. “Our long-term goal is to implement a quantum communication network with multiple links but using more than four dimensions while trying to get around the turbulence,” said Sit.