Enterprises have found that standard cloud migration models are insufficient when moving mission critical workloads and require a specialized approach, according to a study conducted by Forrester Consulting. 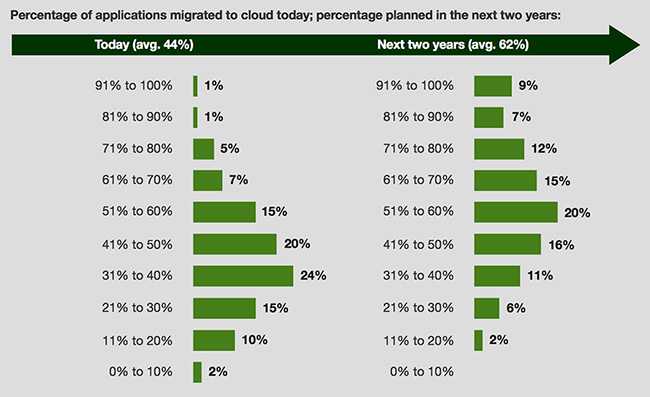 One size does not fit all

The study, which is based on a global survey of 500 IT decision makers at businesses with more than 500 employees, notes that almost half of the cloud migrators questioned are utilizing more than one cloud platform. The study also notes that “many are finding out that each platform has both strengths and weaknesses, and some apps are a better fit for one platform over others.”

Some organizations may still believe in a “one size fits all” approach to cloud migration; however, in practice it is much more complex. Most cloud migrators surveyed take an app-by-app approach and incorporate multiple vendors into the process. Only 32 percent of those surveyed relied on a single megacloud vendor for migration, signaling a preference for multi-cloud.

According to the study, cloud computing strategies have been widely adopted by enterprises, and the migration of mission critical apps to the cloud continues to grow. On average, organizations engaged in active cloud projects today have migrated 44 percent of their apps, and by 2019, this is expected to reach 62 percent.

The study also finds that 49 percent of companies surveyed want the ability to scale resources and costs up and down. Further, 53 percent are migrating to the cloud in order to free up time to focus on their own core differentiators, and 52 percent have embarked on a cloud migration journey to achieve cost savings.

When it comes to selecting a provider, 62 percent of respondents cited performance as a key consideration, with security requirements next at 58 percent, followed by compliance requirements at 50 percent.

In addition to selecting the right provider, they must also take into account the substantive internal resources that are required as well; 47 percent cited having more than 50 people dedicated to the process, and almost half of organizations spend over $1 million on human and IT capital to migrate mission critical apps to the cloud.