Canonical released Ubuntu 17.10 featuring a new GNOME desktop on Wayland, and new versions of KDE, MATE and Budgie. On the cloud, 17.10 brings Kubernetes 1.8 for hyper-elastic container operations, and minimal base images for containers. 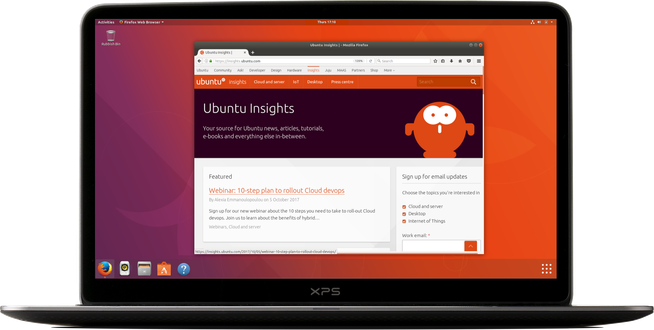 Enhanced security and productivity for developers

The Atom editor and Microsoft Visual Studio Code are emerging as the new wave of popular development tools, and both are available across all supported releases of Ubuntu including 16.04 LTS and 17.10.

The new default desktop features the latest version of GNOME with extensions developed in collaboration with the GNOME Shell team to provide a familiar experience to long-standing Ubuntu users. 17.10 will run Wayland as the default display server on compatible hardware, with the option of Xorg where required.

Connecting to WiFi in public areas is simplified with support for captive portals. Firefox 56 and Thunderbird 52 both come as standard together with the latest LibreOffice 5.4.1 suite. Ubuntu 17.10 supports driverless printing with IPP Everywhere, Apple AirPrint, Mopria, and WiFi Direct. This release enables simple switching between built-in audio devices and Bluetooth.

In the 6 months since April 2017, the number of snaps has doubled with over 2000 now available for Ubuntu, Debian, Solus and other Linux distributions. Snaps are a single delivery and update mechanism for an application across multiple Linux releases, and improve security by confining the app to its own set of data. Hiri, Wavebox, and the Heroku CLI are notable snaps published during this cycle.

Ubuntu 17.10 features platform snaps for GNOME and KDE which enable developers to build and distribute smaller snaps with shared common libraries. Delta updates already ensure that snap updates are generally faster, use less bandwidth, and are more reliable than updates to traditional deb packages in Ubuntu.

The catkin Snapcraft plugin enables Robot Operating System (ROS) snaps for secure, easily updated robots and drones. There are many new mediated secure interfaces available to snap developers, including the ability to use Amazon Greengrass and Password Manager.

Canonical’s Distribution of Kubernetes, CDK, supports the latest 1.8 series of Kubernetes. In addition to supporting the new features of Kubernetes 1.8, CDK also enables native cloud integration with AWS, native deployment and operations on VMWare, Canal as an additional networking choice, and support for the IBM zSeries mainframe.

Network configuration has over the years become fragmented between NetworkManager, ifupdown and other tools. 17.10 introduces netplan as the standard declarative YAML syntax for configuring interfaces in Ubuntu. Netplan is backwards compatible, enabling interfaces to continue to be managed by tools like NetworkManager, while providing a simple overview of the entire system in a single place.

New installations of Ubuntu 17.10 will use Netplan to drive systemd-networkd and NetworkManager. Desktop users will see their system fully managed by NetworkManager as in previous releases. On Ubuntu server and in the cloud, users now have their network devices assigned to systemd-networkd in netplan. Ifupdown remains supported; upgrades will continue to use ifupdown and it can be installed for new machines as needed.