Governments around the world are dramatically increasing their efforts to manipulate information on social media, threatening the notion of the Internet as a liberating technology, according to Freedom on the Net 2017, the latest edition of the annual country-by-country assessment of online freedom, released today by Freedom House. 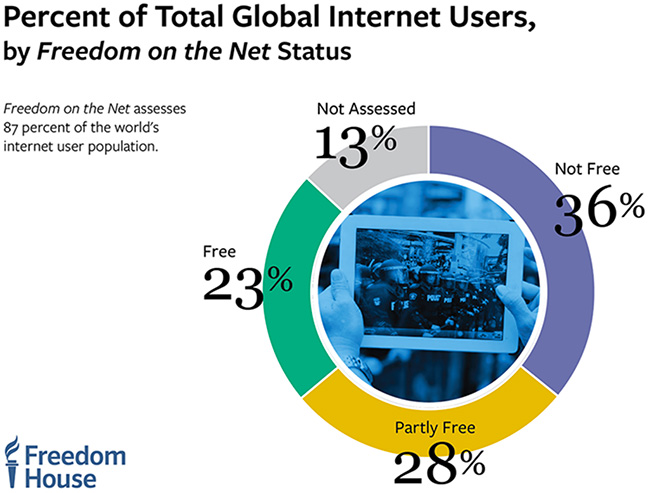 Online manipulation and disinformation tactics played an important role in elections in at least 18 countries over the past year, including the United States, damaging citizens’ ability to choose their leaders based on factual news and authentic debate. The online content contributed to a seventh consecutive year of overall decline in Internet freedom, along with a rise in disruptions to mobile Internet service and increases in physical and technical attacks on human rights defenders and independent media.

“The use of paid commentators and political bots to spread government propaganda was pioneered by China and Russia but has now gone global,” said Michael J. Abramowitz, president of Freedom House. “The effects of these rapidly spreading techniques on democracy and civic activism are potentially devastating.”

“Governments are now using social media to suppress dissent and advance an antidemocratic agenda,” said Sanja Kelly, director of the Freedom on the Net project. “Not only is this manipulation difficult to detect, it is more difficult to combat than other types of censorship, such as website blocking, because it’s dispersed and because of the sheer number of people and bots deployed to do it.”

“The fabrication of grassroots support for government policies on social media creates a closed loop in which the regime essentially endorses itself, leaving independent groups and ordinary citizens on the outside,” Kelly said.

Internet freedom around the world

Freedom on the Net 2017 assesses Internet freedom in 65 countries, accounting for 87 percent of Internet users worldwide. The report primarily focuses on developments that occurred between June 2016 and May 2017, although some more recent events are included as well.

Governments in a total of 30 countries deployed some form of manipulation to distort online information, up from 23 the previous year. Paid commentators, trolls, bots, false news sites, and propaganda outlets were among the techniques used by leaders to inflate their popular support and essentially endorse themselves.

In the Philippines, members of a “keyboard army” are tasked with amplifying the impression of widespread support of the government’s brutal crackdown on the drug trade. Meanwhile, in Turkey, reportedly 6,000 people have been enlisted by the ruling party to counter government opponents on social media.

Most governments targeted public opinion within their own borders, but others sought to expand their interests abroad—exemplified by a Russian disinformation campaign to influence the American election. Fake news and aggressive trolling of journalists both during and after the presidential election contributed to a score decline in the United States’ otherwise generally free environment.

“When trying to combat online manipulation from abroad, it is important for countries not to overreach,” Kelly said. “The solution to manipulation and disinformation lies not in censoring websites but in teaching citizens how to detect fake news and commentary. Democracies should ensure that the source of political advertising online is at least as transparent online as it is offline.”

For the third consecutive year, China was the world’s worst abuser of Internet freedom, followed by Syria and Ethiopia. In Ethiopia, the government shut down mobile networks for nearly two months as part of a state of emergency declared in October 2016 amid large-scale antigovernment protests.

Less than one-quarter of the world’s Internet users reside in countries where the Internet is designated Free, meaning there are no major obstacles to access, onerous restrictions on content, or serious violations of user rights in the form of unchecked surveillance or unjust repercussions for legitimate speech. 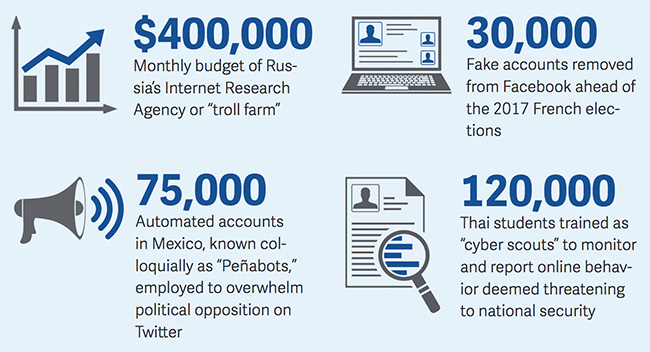 Manipulation armies, by the numbers

State censors targeted mobile connectivity: An increasing number of governments have restricted mobile Internet service for political or security reasons. Half of all Internet shutdowns in the past year were specific to mobile connectivity, with most others affecting mobile and fixed-line service simultaneously. Most mobile shutdowns occurred in areas populated with ethnic or religious minorities such as Tibetan areas in China and Oromo areas in Ethiopia.

Physical attacks against netizens and online journalists expanded dramatically: The number of countries that featured physical reprisals for online speech increased by 50 percent over the past year—from 20 to 30 of the countries assessed. In eight countries, people were murdered for their online expression. In Jordan, a Christian cartoonist was murdered for mocking Islamist militants’ vision of heaven, while in Myanmar, a journalist was murdered after posting on Facebook notes that alleged corruption.