93% of consumers believe they do not own or do not know if they own a connected car and 49% do not own and do not plan on buying one in the future. However, the Irdeto Global Connected Car Survey of 8,354 consumers indicates that they are aware that a connected vehicle is susceptible to a cyberattack. 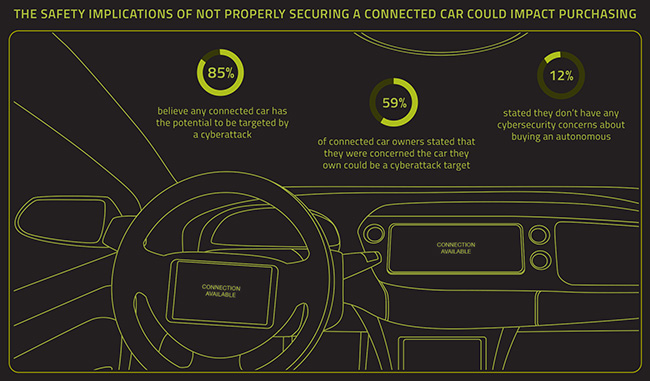 Of the consumers surveyed across six different countries, including Canada, China, Germany, Japan, UK and US, 85% stated they believe that any connected car has the potential to be targeted by a cyberattack. Both Canada and the UK responded the highest with 90% of consumers stating that a connected vehicle could be a target for hackers.

While the high percentage of consumers who say they do not own a connected car may be a result of not understanding the components that make up a connected vehicle, it is also possible that the awareness of safety risks and cyberattacks could be a major influencer in the reluctance of consumers to purchase a connected car.

The desire to consider cybersecurity when purchasing a car was most prevalent with younger generations aged 25-34, with 62% stating they would conduct this research. On the opposite end of the spectrum, only 43% of consumers 55+ would look into the car’s cybersecurity protection.

“It’s clear that cybersecurity will be a key factor for many consumers when they are purchasing their next vehicle,” said Daniel Thunberg, Global Head, Connected Transport, Irdeto. “It is important for automakers to make security a priority by implementing a multi-layered, defense in-depth strategy so their brand is not perceived by consumers as one that does not take security seriously. By implementing security at the beginning of the manufacturing process, OEMs and Tier 1 suppliers will not only stay one step ahead of hackers, but will show consumers that they are committed to their safety by implementing a proper security approach.” 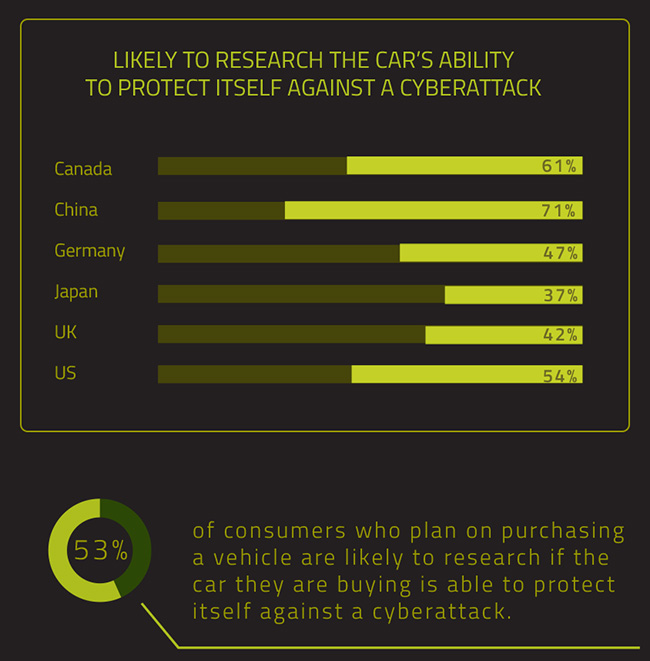 Connected cars and autonomous vehicles on the road

The survey also found that 59% of current connected car owners are concerned that their vehicle could be targeted by a cyberattack.

Connected cars are also not the only type of next-generation automobile that consumers perceive as being a target for hackers. The survey results found that most consumers are aware that autonomous vehicles introduce new security risks. Only 12% of respondents stated that they don’t have any cybersecurity concerns about buying an autonomous vehicle.

While consumers may not completely understand what components in their vehicle make up a connected or autonomous car, they do understand that purchasing these vehicles brings some security risks.

“As the number of connected cars and autonomous vehicles on the road grows, the ways the automobile communicates with its surroundings and other connected devices also increases,” said Jaco Du Plooy, Vice President of Cloakware, Irdeto. “Protection of only the vehicle itself is not enough. The entire connected vehicle ecosystem must be protected, including securing V2X communications so that data transferred between the vehicle and devices is secure. This is especially the case with self-driving vehicles. It is critical to implement a proper security strategy that includes protection for telematics devices in order to future-proof vehicles from being exploited.”